Not only did the pandemic heighten the need to broaden access to healthcare, it showed that the private and public sectors can collaborate, says the health department's Nicholas Crisp 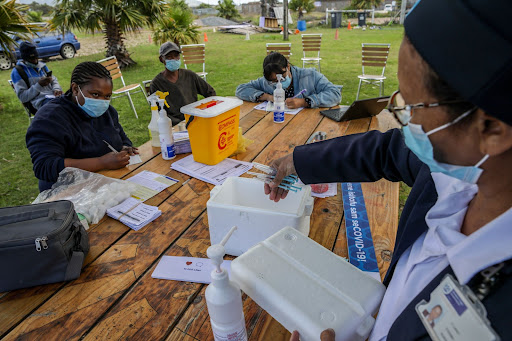 South Africa’s efforts to reform its health system through a controversial national insurance plan may have been boosted by Covid-19. Picture: BLOOMBERG

SA’s efforts to reform its health system through a controversial national insurance plan may have been boosted by Covid-19.

The affect of the coronavirus — a measure of excess deaths suggests that about 300,000 people in the country have died — has heightened the need to reduce health inequality, Nicholas Crisp, deputy director-general at the department of health, said in an interview. The pandemic has also shown the private and public sectors can collaborate effectively, he said.

“We did bang heads a lot in the beginning trying to find our way between different people’s responsibilities,” Crisp, 62, said in an interview from his office in Pretoria. “The bottom line was we needed to find a way to work together.”

SA’s ruling ANC initiated the National Health Insurance (NHI) initiative in 2007 to broaden access to medical treatment in a country where at least 72% of the population relies on a public system with too few doctors and dilapidated facilities, while private healthcare competes with some of the best in the world. The country is the world’s most unequal, according to the Thomas Piketty-backed World Inequality Lab.

The NHI’s implementation subsequently stalled while funding and operational details are ironed out and the pandemic’s burden on the health system further slowed the process. Crisp leads the NHI office and the country’s Covid-19 vaccine rollout.

Under the NHI, the government intends to procure services from private hospitals and doctors at rates to be determined by the state. It also wants more accountability, transparency and tighter regulation of the non-state industry that’s emblematic of SA’s status as the world’s most unequal nation.

Through the pandemic,“we learnt that when you’re managing a public health challenge, no matter what that public health issue is, you have to work with one national system,” Crisp said. “You cannot have nine provincial systems and you can’t have every private supplier or provider doing what they want to do.”

Critics of the NHI say it’s unaffordable, though Crisp countered that with about 8.5% of GDP already spent on healthcare, once duplication and inefficiencies are removed, the leap isn’t as big as many think.

In addition, the state’s work to combat the pandemic quickly became soured by allegations of corruption and incompetence. Former health minister Zweli Mkhize — Crisp’s then ultimate boss —  resigned in 2021 after a probe implicated his family in a tender scandal.

“People like me are really disappointed, in fact angry, about the fraud and corruption that has made it more difficult for us to do our job,” Crisp said.  “But really, do we want to continue with what we’re doing now or do we want to build something that’s sustainable?”

In SA, almost two-thirds of all the specialists in the country are in the private sector.

“They do amazing stuff, but they’re not accessible to the people who get their services in the public sector,” Crisp said. “How do we access them if we don’t have a system that works more closely together and shares its resources more effectively?”

LETTER: NHI a recipe for disaster

Medical schemes regulator dismays sector with another reprieve for health ...

LETTER: NHI a recipe for disaster

Medical schemes regulator dismays sector with another reprieve for health ...