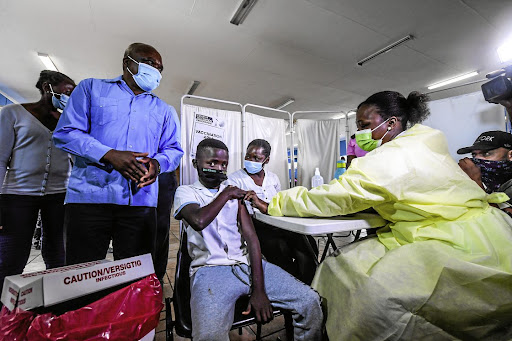 Doing his part: A youngster gets vaccinated at OR Tambo Community Health Centre in Diepsloot. Picture: Gallo Images/Sydney Seshibedi

The African Christian Democratic Party (ACDP) and several public interest groups have launched legal action against the government and SA’s medicines regulator in an attempt to stop Covid-19 jabs for children between the ages of 12 and 17.

The government began offering the Pfizer/BioNTech Covid-19 vaccine to over 12s on October 20 and had by Friday inoculated almost 100,000 children, barely 1.5% of the estimated 6.5-million in this age bracket. The government has opted to give the over 12s only one Pfizer shot, unlike adults who receive two, and they are not required to obtain parental consent.

On Friday the ACDP and three other applicants launched an urgent application in the Pretoria high court seeking to halt the vaccine rollout to the over 12s, pending the outcome of an appeal lodged with the SA Health Products Regulatory Authority (Sahpra) against its emergency use authorisation of the jab in this age group. Exceptions could be granted for children with underlying medical conditions, provided the jab was authorised by a doctor, they said.

The other applicants are a non-profit organisation called Free the Children, registered with the Companies and Intellectual Property Commission (CIPC) on October 8; the Caring Healthcare Workers Coalition, founded by Durban GP Naseeba Kathrada, a campaigner for wider access to the controversial Covid-19 treatment Ivermectin; and the Covid Care Alliance, a non-profit organisation registered with the CIPC on August 11. They have named health minister Joe Phaahla, acting health director-general Nicholas Crisp and Sahpra as respondents.

ACDP NEC member and attorney Bongani Luthuli said the party was opposed to vaccinating children against Covid-19 because there was insufficient evidence to warrant it. The ACDP did however support the use of Ivermectin, which he described as a “highly effective” treatment.

Ivermectin is a cheap anti-parasitic medicine used to treat river blindness in humans and various livestock diseases. It has been widely touted by supporters as a treatment for Covid-19, but numerous medicine regulators have warned against its use, saying there is insufficient evidence to show it works.

In a statement released on Friday, the ACDP said children were not at risk of serious illness or death from SARS-CoV-2, the virus that causes Covid-19, and there was “no scientific, reasonable or rational reason,” to vaccinate them. Vaccination was contrary to the best interests of children, it said, objecting to them being used as a “shield to protect adult society”.

In his founding affidavit ACDP leader Kenneth Meshoe cites the opinions of US cardiologist Peter McCullough  and UK pathologist Clare Craig. McCullough faces a $1m lawsuit from his former employer Baylor University Medical Centre for allegedly affiliating himself with the organisation while campaigning against vaccines, while Craig maintains there has been an increase in UK excess mortality rates among young men who received the Pfizer shot.

Luthuli said the ACDP had chosen not to use local experts because they risked censure from their professional bodies.

Crisp said the government decided to offer vaccines to the over-12s because there was extensive global evidence that they saved lives, including children’s lives. The department would oppose the ACDP’s legal challenge, but had yet to file responding papers, he said.

Sahpra CEO Boitumelo Semete-Makokotlela declined to comment, saying only that Sahpra would oppose the matter.

Nick Hudson and PANDA are wrong. Believing them is deadly

Vaccines are working in South Africa. Here’s the proof
Opinion
11 months ago