If approved, molnupiravir would be the first treatment at-risk patients could take at home 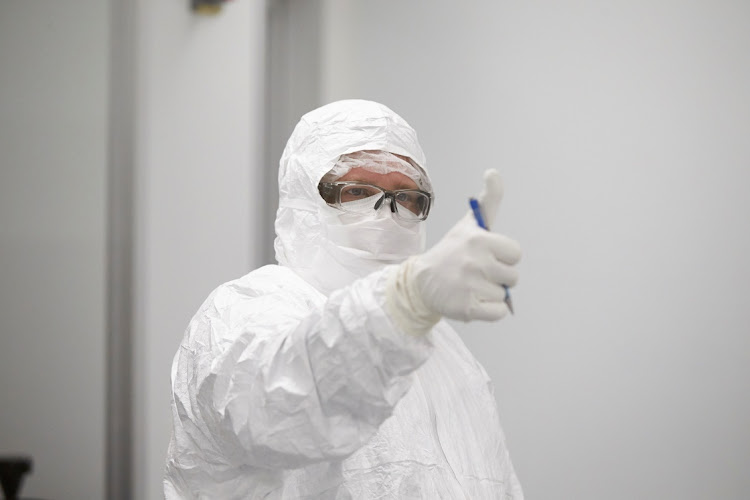 A laboratory worker gestures during the final filtration phase of coronavirus disease vaccine production at a facility in Chesterfield, Missouri, US in this undated file photo. Picture: REUTERS

Pharmaceutical manufacturer MSD will seek authorisation for its coronavirus treatment molnupiravir from SA’s medicines regulator, the company confirmed on Tuesday.

If approved, molnupiravir would be a potential game changer, as it would be the first treatment at-risk patients could take at home. All the currently approved therapies used in SA, including dexamethasone and remdesivir, require intravenous administration, and are limited to a hospital setting.

Merck, as it is known in the US, and its partner, Ridgeback Biotherapeutics, have applied for emergency use authorisation for the pill from the US Food and Drug Administration (FDA), after interim analysis of a phase 3 trial of the drug found it halved the risk of hospitalisation and death in people at risk of developing severe Covid-19. The international trial included participants from SA.

“Our regulatory teams across the world are preparing dossiers to submit to various regulatory bodies, including Sahpra (the SA Health Products Regulatory Authority),” said MSD’s MD for SA and Sub-Saharan Africa, Zweli Bashman.

“We by no means believe it is a replacement for vaccines. This molecule provides additional artillery in the armamentarium of healthcare practitioners,” he said.

Bashman declined to be drawn on how much the drug would cost in SA, saying only that MSD would apply a tiered pricing model, using World Bank country income data, that would reflect countries’ ability to finance their response to the pandemic.

“We are committed to providing timely access, not only to countries with higher incomes but also to low- and middle- income countries. In addition to that we have entered into non-exclusive voluntary licences with established generic manufacturers to accelerate access and availability,” he said. MSD announced in April that it had signed agreements with five Indian generics manufacturers to produce molnupiravir. Diversifying its supply chain would enable MSD’s partners to commercialise the product at affordable prices for lower income countries, he said.

MSD plans to make 400-million capsules, enough to treat 10-million people, by the end of 2021. It has already committed to supplying 1.7 million courses of treatment to the US government, once cleared by the FDA.