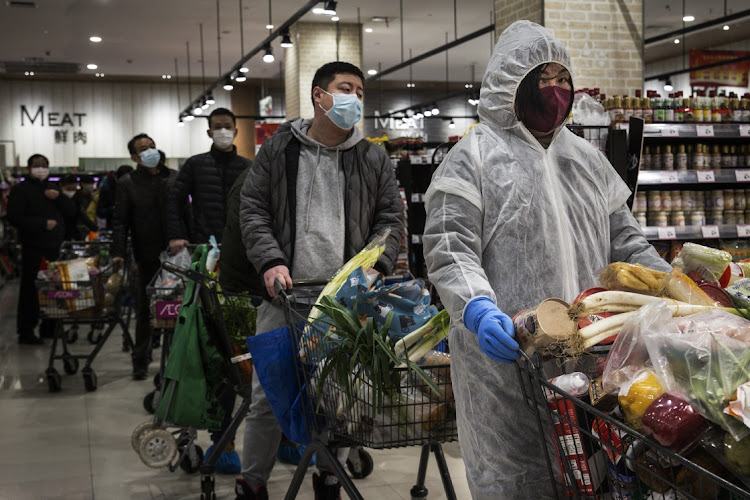 Residents wear protective masks as they line up in the supermarket on February 12 2020 in Wuhan. Picture: Getty Images

Sub-Saharan African countries were among the least prepared for a pandemic, be it the novel coronavirus or a future disease, an official of the Bill and Melinda Gates Foundation warned on Wednesday.

While no cases of the coronavirus have so far been confirmed in Africa, it is feared that it may already be spreading undetected as many countries on the continent have weak surveillance and fragile health systems.

The foundation announced last week that it would provide up to $100m (about R1.5bn) to fight the novel coronavirus that emerged in China late last year. The respiratory illness, which was named Covid-2019 by the World Health Organisation on Tuesday, has infected more than 42,700 people in mainland China, and killed more than 1,000. A further 395 cases have been confirmed in 24 other countries, according to WHO figures.

“Most countries ... particularly those in Sub-Saharan Africa are not fully prepared for this kind of an outbreak,” said Chris Elias, president of the global development programme at the foundation.

“That is why the WHO, the Gates foundation and many other partners have been trying to get ahead of this epidemic while there are still no cases confirmed in Africa, making investments to strengthen surveillance and diagnostic capability,” he said.

The foundation has earmarked one-fifth of its $100m commitment for investments in the most vulnerable countries, he said in an interview with Business Day. The WHO has previously said it is prioritising 13 African countries, including SA, for support due to their high air traffic with China.

Until early February there were only two laboratories on the continent that could conduct tests for coronavirus — the National Institute of Communicable Diseases (NICD) in Johannesburg, and the Institut Pasteur in Dakar, Senegal, but the WHO has moved rapidly to help train laboratory workers in more countries on how to use coronavirus tests and provide the necessary reagents.

The NICD said on Wednesday that it conducted 63 tests for suspected SA cases of Covid-19, and all proved negative. It conducted tests for other African countries, but has not disclosed which ones.

African Centres for Disease Control and Prevention and the WHO Africa regional office were set to receive $5m from the foundation, and part of this money had already been directed to strengthening surveillance, said Elias. Early detection and containment were essential to prevent the widespread dissemination seen in China, he said.

Elias said strong health and resilient health systems were vital in the face of any epidemic, as weak systems would be overwhelmed.

“If you look at the experience of West Africa five years ago, many people died from Ebola, but many people died from common illnesses because the health system stopped functioning, children were not immunised, [and pregnant] women were afraid to go to hospital and so delivered at home” he said.

WHO tracks coronavirus spread for new hotspots in China

WHO tracks coronavirus spread for new hotspots in China