The disease broke out in the Vhembe district in January, which resulted in the World Organisation for Animal Health temporarily suspending SA’s foot-and-mouth disease-free zone status 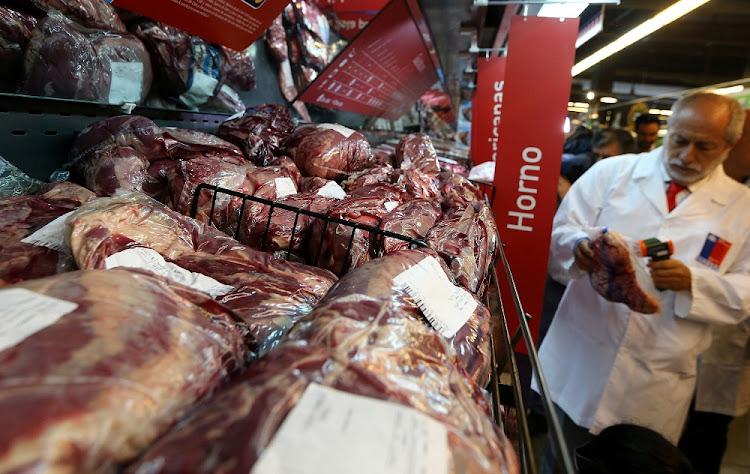 A health inspector checks the meat at a supermarket, in Santiago, Chile. File photo: REUTERS/PABLO SANHUEZA

The government says good progress has been made in negotiations to re-open markets for South African meat products following the end of a foot-and-mouth disease outbreak  in Limpopo.

“Following the sharing of update reports with trade partners, trade restrictions on the export of processed products have been relaxed by many trade partners. Trade in safe commodities to direct neighbouring countries have largely been accepted and, where necessary, negotiation of new health certificates is under way,” Zokwana said.

“There has also been good progress with negotiations to re-open markets for deboned matured beef, processed dairy products and processed hides and skins to the other African countries, the Middle East and the Far East," he also said.

The disease broke out in the Vhembe district in January, resulting in the World Organisation for Animal Health (OIE) temporarily suspending SA’s foot and mouth disease-free zone status.

A study conducted by the Red Meat Producers Organisation (RPO) in 2017 found that if the country lost its foot and mouth disease-free status, the economy would lose about R6bn a year. The country lost its status in 2011 after an outbreak and only regained it in 2014, according to the organisation.

Agriculture, forestry and fisheries minister Senzeni Zokwana said on Monday that the recent suspension of the foot-and-mouth disease-free status had had a devastating effect on trade of cloven hoofed animals and their products.

“While some countries instituted official bans, trade was further disrupted as a result of the inability to certify for any exports where foot-and-mouth disease-free-zone attestation is required,” Zokwana said.

Zokwana said his department had notified trade partners and provided an update on the disease outbreak in SA.

A request was also made to trade partners to consider continuation of trade in safe products. Guarantees were provided for products that did not pose a risk of transmitting the disease, such as heat-treated meat and dairy products, deboned and matured beef, scoured wool, salted hides and skins, livestock embryos and pork products from known foot-and-mouth disease free pig compartments, the minister said.

Zokwana said the government and industry continued to work together to contain the disease. A joint operations committee was established and meets on a daily basis, consisting of traffic, departmental and district disaster management, police, industry reps (the National Animal Health Forum and the South African Feedlot Association) and provincial and department veterinary officials.

The committee has facilitated the placement of 15 road blocks at strategic points to restrict the movement of animals.

“A Veterinary Operations Committee (VOC), which meets daily, was also established. The VOC has three main activities: inspections/surveillance, vaccination and movement control.  Culling of affected or in-contact animals in the area, is at the moment, not advocated,” Zokwana said.