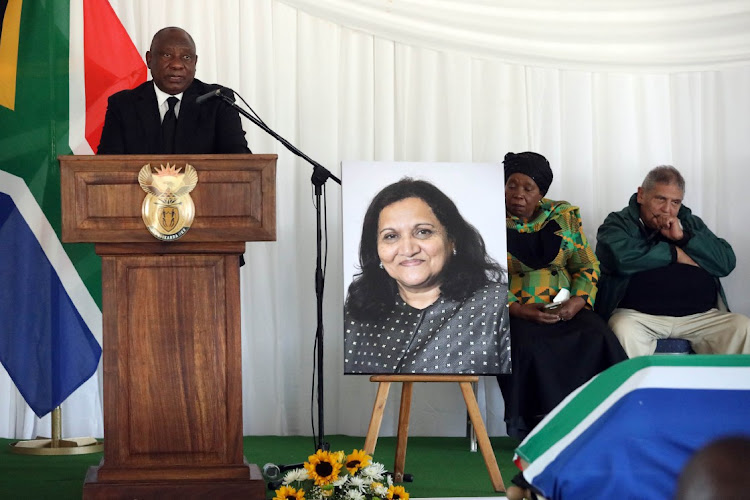 President Cyril Ramaphosa speaks during the funeral of ANC deputy secretary-general Jessie Duarte in West Park Cemetery in Johannesburg on Sunday, honouring her selflessness and calling for the nation to follow in her footsteps. Picture: ANTONIO MUCHAVE/SOWETAN

Government and opposition leaders have paid tribute to the ANC’s “feisty and fiery” Jessie Duarte, who died on Sunday after a long battle with cancer.

A member of the ANC’s top six, Duarte was the party’s deputy secretary-general and was standing in for suspended secretary-general Ace Magashule before she went on medical leave in November to undergo treatment.

ANC president Cyril Ramaphosa on Sunday described the late struggle veteran as a champion of honesty, integrity, selflessness and service. “She was at the forefront of the fight against the apartheid state at the height of its cruel and oppressive rule,” Ramaphosa said in a eulogy at the funeral on Sunday, which was held in accordance with Muslim rites.

“Who can forget the power of her intervention during the inquest into the death of Ahmed Timol five years ago, when she exposed the lies of the security branch police, telling the world what she and her family had witnessed and endured at their cruel hands,” Ramaphosa said. 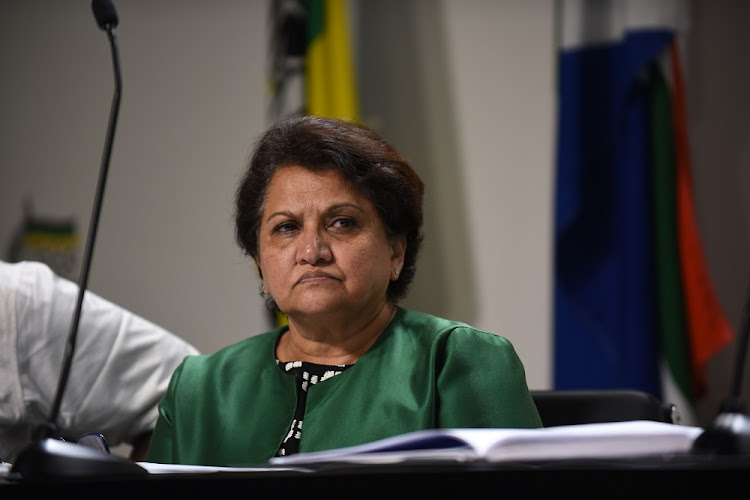 The president also pointed out that Duarte had the courage to speak out honestly and directly about the abuses and destructive tendencies she saw within the ANC and the government.

“At a time like this, our nation needs more people of her courage and consciousness,” Ramaphosa said.

Ramaphosa added that Duarte was a unifier who fought against factionalism and disunity. “She stood firm against those who would sow division, who were interested only in personal advancement, who pursued narrow interests to the neglect of the needs of the people,” the president said.

The ANC declared a week of mourning with flags flying at half-mast. A national memorial service is scheduled to take place on Thursday.

Duarte, a long-time anti-apartheid activist who served on the ANC’s national executive committee (NEC) from 2002, worked closely with struggle veterans Walter Sisulu and Nelson Mandela and held posts in the party and government.

She served as SA’s ambassador to Mozambique between 1999 and 2003 and as the Gauteng provincial government’s MEC for safety & security in 1994. Though she was a key player in Mandela’s team, she later became one of president Jacob Zuma’s longest-standing allies.

However, Duarte was instrumental in the ANC’s decision to recall Zuma as head of state in 2018. She rallied the NEC, explaining that it was in the ANC and country’s interest for him to go.

Throughout Duarte’s term as deputy secretary-general she defended the party’s decisions, though she did not always agree with them. At times she lashed out at journalists and commentators for questioning her public stance on everything from e-tolls to her support for Zuma.

Little is known about the pressures Duarte came under before she asked for the ANC to release her from her duties in late 2021. The ANC NEC decision to force Magashule to step aside pending the outcome of a corruption case against him was left to Duarte to implement.

Duarte confirmed to Business Day that she had to do this in the face of intimidation, which included having to “stare down the barrel of the gun”.

She was also extremely hurt when she heard that some factions in the ANC were blaming the outcome of the 2021 elections on her being a woman and “not being black enough”.

The DA extended its tributes to Duarte, with federal council chair Helen Zille describing her as a “fiery character” who held a number of positions in the SA party political landscape over many years.

The EFF called Duarte a “fierce, firm and forthright individual who paid her dues in the struggle for liberation in SA.

“She was passionate about gender equality, and fighting against [all forms] of sexism and patriarchy.”

In a joint statement parliament’s presiding officers, National Assembly speaker Nosiviwe Mapisa-Nqakula and National Council of Provinces chair Amos Masondo, described Duarte as a “feisty and fiery voice of reason” and an uncompromising critic of social injustice and discrimination.

Duarte’s brother Abbas Dangor told SABC News she was a generous and compassionate person who cared deeply for people.

Update: July 17 2022
This article has been updated with more reaction and additional information.

The party is trying to put distance between itself and Eskom, crossing its arms and bleating about the state utility
Opinion
8 months ago

The uncomfortable truth for the ANC is that, if anything, it deserved to do far worse than it did
Opinion
9 months ago
Next Article

Inside the ANC’s cutthroat power struggles

Inside the ANC’s cutthroat power struggles