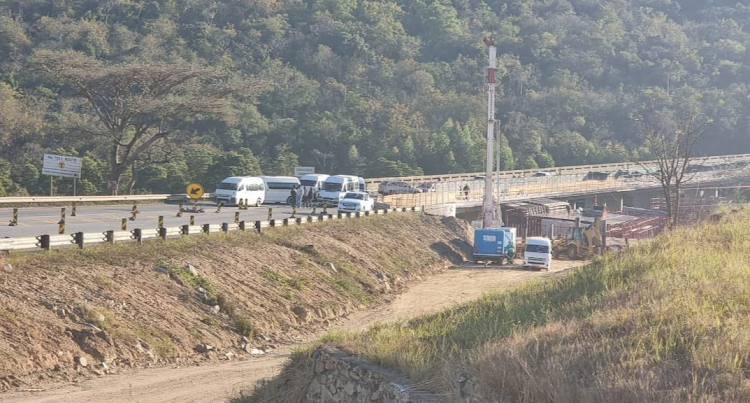 The N4 between Mbombela and Mozambique has been shut since early on Wednesday as trucks and taxi associations protest against the spike in fuel costs. Picture: THANDO GRAHAM VIA TWITTER

Local and international tourists entering and leaving Kruger National Park have been urged to use alternative routes because of the sporadic protest action over fuel price hikes that have shut many roads near Mbombela (Nelspruit).

Routes leading to the park around Mbombela have been closed as a result of the protests.

The Kruger National Park said in a statement on Wednesday tourists should use the Orpen, Phabeni, Malelane, Crocodile Bridge and Kruger gates to access the park, depending on which of the park’s tourist facilities they were booked into. The entry gates would be open until 8pm.

Motorists were warned to avoid the N4 into Mbombela.

The closures affected the 105km route from Komatipoort to Mbombela, which connects the city to Mozambique.

This route is heavily used by trucks transporting goods between the two countries.

06/07 at 11:30. PLEASE NOTE: The following areas along the #TRACN4route are affected due to #ProtestActions

Solange Soares, spokesperson for Trans African Concessions (Trac), which monitors the route from Tshwane to Maputo, said the road from the border to Mbombela is closed, but the west side of the tunnel has been opened so vehicles can enter the city.

There was a report of stone throwing at Emgwenya, but it was not related to the protest, as some reports suggested.

“There were allegedly stones thrown in one incident earlier this morning [Wednesday]. It did not happen as part of the protest and is an isolated incident. Law enforcement is at [the] tunnel to rectify the situation.

Mpumalanga SAPS spokesperson Brig Selvy Mohlala urged motorists to refrain from travelling along the N4 as the protest is sporadic.

Commuters in townships in the lowveld were stranded on Wednesday morning as buses and taxis were not operational, reported RiseFM. Roads were blocked with trucks and debris, denying access to motorists.

Inaccessible roads included the N4 between Matsulu and Kanyamazane, the R538 in Karino and some of the busiest roads in the Mbombela CBD.

“The road closure is an inconvenience, but when we look at the bigger picture, I totally understand the anger behind this protest action. The cost of living is already high and now the petrol price has again increased. Government needs to reconsider these prices,” said Bonginkosi Nkosi, who lives in Matsulu.

Taxi operators in the area are also up in arms and support the protest.

Sibusiso Mbazima said they will be forced to increase taxi fares, which is seen as unfair due to it being so soon after the previous increase.

“If we do not voice our frustrations, taking a taxi from Matsulu to town will cost up to R50, which is unrealistic for the average consumer who is living from hand to mouth”, said Mbazima.

When asked who was leading the protest action, taxi association Top Star said it did not know as its leadership was not informed of the action.

Top Star’s John Mavundla said: “Taxi drivers did not consult with us. They went above our heads and this means today we will not be making any money.”

“I left Mozambique last night in hopes to be in Johannesburg by this morning, but our bus was turned back at Kanyamazane and now we are still on the N4, with no access to ablution facilities. I’m hungry and still uncertain when the road will open,” said Facilia Nhachungue.

Mpumalanga law-enforcement officials are on high alert to curb criminality that might erupt.

Department of community safety spokesperson Moeti Mmusi said MEC Vusi Shongwe “is calling on all protesters to demonstrate within the ambits of the law. They do not have to infringe upon the rights of others, hence he condemns the closures of the roads coming in and out of Mbombela in the strongest terms.”