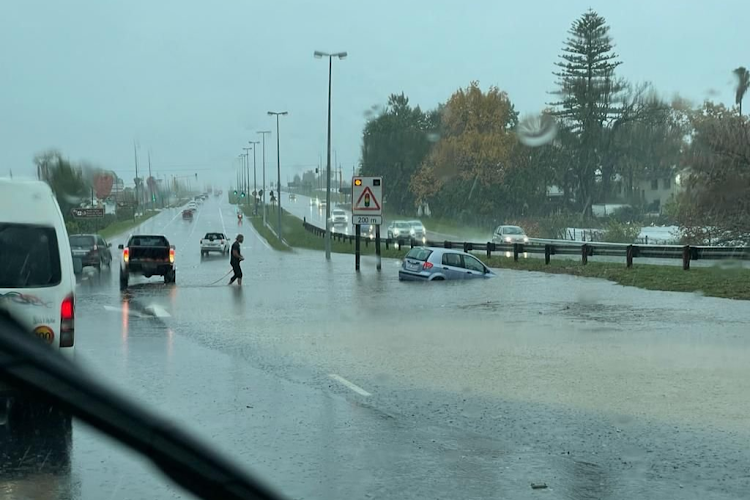 Localised flooding was reported on the R44 near the Mooiberge Farmstall between Stellenbosch and Somerset West on Monday. Picture: Stellenbosch municipality/Facebook

Cape Town’s disaster risk management centre (DRMC) was on high alert on Monday as a cold front brought heavy rainfall across the city.

“Continuous rain and scattered-to-widespread rain showers are expected to persist from Monday into Wednesday. Flooding is expected over southwestern parts of the Western Cape,” the SA Weather Service (SAWS) warned on Monday.

The cold front made landfall overnight, accompanied by strong winds and rough seas.

Stellenbosch municipality reported localised flooding on the R44 near the Mooiberge Farmstall between Stellenbosch and Somerset West.

“Emergency teams have been dispatched. Please switch on your headlights, maintain a safe following distance and drive carefully,” the municipality said in an update.

Chapman’s Peak Drive was closed due to rockfalls.

DRMC spokesperson Charlotte Powell said at about 3.30pm on Monday that there had been no major incidents reported since the cold front made landfall.

Meanwhile, as day zero looms large for Nelson Mandela Bay metro in the Eastern Cape, urgent appeals are going out to the thousands of residents who will be affected to use water sparingly.

In mass appeals through public posters, online platforms and even mobile loudhailers, residents are being asked to cut their water consumption to 50l per person per day.

The metro’s director of water distribution, Joseph Tsatsire, said while they were not implementing water-shedding, as was being done by the nearby Kouga municipality, almost half the metro was already experiencing water shortage.

He said the metro’s water consumption was 278 megalitres per day, while there was only 230 megalitres available, mainly from the Gariep Dam.

“The metro will experience water disruption or intermittent supply because the available resources are less than the usage. It means that if the consumers reduce consumption to 230 megalitres the metro will avoid the so-called day zero in the red zone,” Tsatsire explained.

In their efforts to encourage consumers to reduce their water usage, a campaign was launched calling for people to use just 50l per person per day.

On Monday, the Impofu Dam had dried up, while the Churchill Dam was 11 days away from being emptied. The Loerie Dam had 37 days of supply to go.

Most municipalities are financially unsustainable and their service delivery dysfunctional, threatening the entire country’s economic growth prospects
Opinion
1 week ago