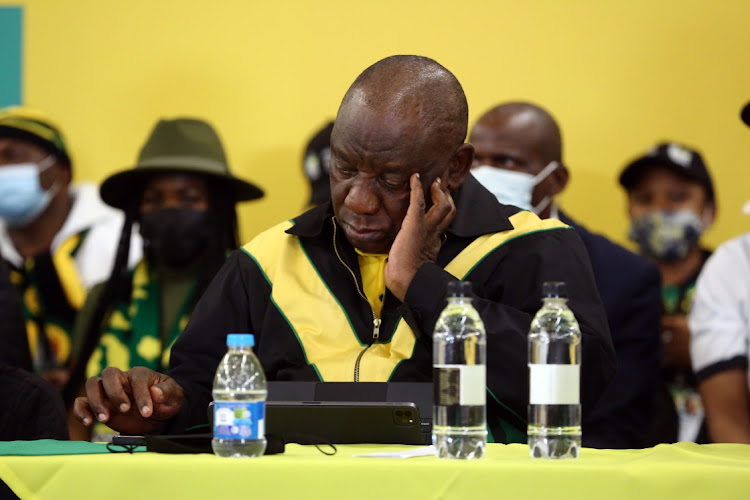 President Cyril Ramaphosa has told the ANC’s national working committee (NWC) he intends to appear before the integrity commission over allegations that he covered up a robbery at his Phala Phala farm in Limpopo.

It is understood Ramaphosa made this known at the party’s NWC meeting on Monday after Tony Yengeni called on him to step aside and allow an acting president to take over. Yengeni also suggested the president appear before the commission.

Insiders said the party’s national officials came under fire at the meeting for “deliberately dragging their feet” in dealing with the criminal complaint against Ramaphosa.

The top officials, including national chair Gwede Mantashe, treasurer-general and acting secretary-general Paul Mashatile and co-ordinator in the party secretary-general’s office Gwen Ramokgopa were taken to task for not treating the matter with urgency.

Ramaphosa faces accusations of covering up a robbery at his farm in Limpopo where it is alleged that foreign currency estimated to be about $4m (about R61.7m) was stolen.

Former state security boss Arthur Fraser last week laid a criminal charge against Ramaphosa for breaching the Prevention of Organised Crime Act by allegedly not reporting the robbery when it took place in 2020.

Ramaphosa met the ANC top officials on Monday morning and they were expected to present a report to the NWC in the afternoon, but it did not happen.

This was met with criticism from Yengeni and social development minister Lindiwe Sisulu, according to insiders.

In a heated meeting, Yengeni called for Ramaphosa to be subjected to the party’s integrity commission. Ramaphosa later indicated he had already made contact with the commission.

Ramaphosa was defended by Mantashe, who had an intense back-and-forth with Sisulu as she questioned why they did not bring the report to the meeting.

Sisulu kept asking about the whereabouts of the report, which was expected to make recommendations on what should happen to Ramaphosa, but Mantashe cut her off, saying there was no report.

Ramaphosa told the meeting Mashatile had promised he would mention that he had decided to appear before the integrity commission.

“He said because we may hop on the same issue which comrade Tony has raised. The TG did commit to him to add [to the report] that he has decided to go to the integrity commission and he has already been in touch with them after the meeting with the officials,” said the insider.

Mantashe defended the president, pointing out that there was no report

“He said ‘comrade president, I want to suppress you on that, the officials have not got a report, there is no report and therefore if we want to reduce the NWC to media reports then we can take [the] risk, but the officials have a duty and an obligation to bring the report to the NWC’,” said the insider.

However, Naledi Pandor, an ally of Ramaphosa, is said to have supported Sisulu in calling for the report to be tabled as soon as possible.

Pandor told Mantashe if this matter was not handled with urgency accusations would be made that Ramaphosa was being treated with kid gloves.

“She said ‘I think the president has assisted, I do think it’s vital that the officials process the matter and bring a report back to the NWC, because as you know, there will be accusations that there is a double standard in approach to particular leadership and how we deal with such matters that are in the public domain and are of a serious nature’,” said another insider.

Pandor is said to have called for the NWC to process the matter as soon as possible.

My hands are clean, says Ramaphosa, but questions about forex remain

He isn’t supposed to have spoken about those matters, says newly elected  regional chair Dada Morero
National
4 weeks ago
Next Article