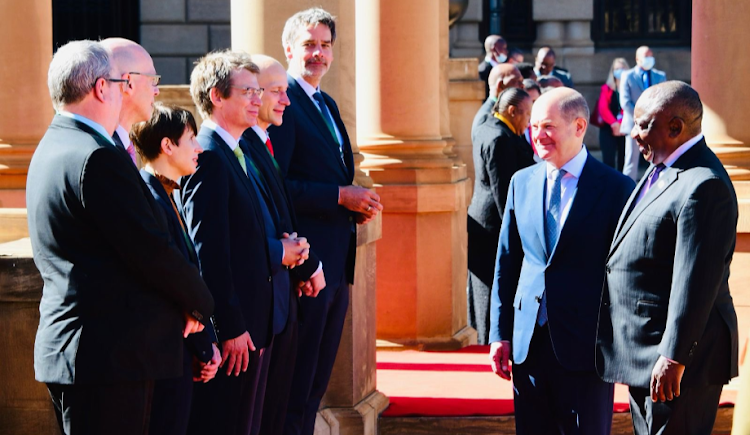 Chancellor Olaf Scholz of Germany at the Union Buildings with President Cyril Ramaphosa, May 24. Picture: PRESIDENCYZA

President Cyril Ramaphosa has told his German counterpart Chancellor Olaf Scholz that vaccines manufactured locally are not being purchased.

Commending the European country for “the partnership you have demonstrated, particularly in enabling us to produce Covid-19 vaccines”, Ramaphosa said “however, these efforts have suffered a setback”.

“While we started vaccine production in SA last year and manufacturing facilities are under construction in other African countries, we find there are no buyers for vaccines produced in Africa.

“This is a matter of great concern to us. This is an area that should concern you because you have been at the forefront of helping the African continent to move up the ladder of being able to produce vaccines,” said Ramaphosa.

He was addressing cabinet ministers from both countries and advisers of the two presidents in the cabinet room at the Union Buildings in Pretoria, on Tuesday. Scholz, who brought a business delegation to the country, is on a one-day official visit to SA.

Ramaphosa said: “Germany has rendered extensive support to combat the Covid-19 pandemic. Germany was the first country to respond to calls for the ACT Accelerator Facilitation Council, which I co-chair with the prime minister of Norway. It was a call to ask countries to contribute their fair share towards ending the pandemic. We welcome Germany’s announcement at the second global Covid-19 summit earlier this month that it will donate €850m (about R14bn) to assist poorer countries to increase their vaccination rates and €50m (about R840m) to the vaccine preparedness fund.”

Ramaphosa said the visit comes at a time when SA is rebuilding after the deadly floods in KwaZulu-Natal in April and the Covid-19 pandemic. He said he was looking forward to discussing how SA can work with Germany to reindustrialise the country, advance infrastructure development and job creation.

“Ours is a true partnership. It is also practical partnership that is focused on mutual development and rooted in solidarity and respect.

“We look forward to deepening trade and investment ties with Germany. We anticipate constructive discussions around the green economy, clean energy and climate resilience as we embark on new technologies such as hydrogen as well as other renewable energy technologies.”

He said an important area of co-operation was the just transition partnership between the two governments, France, the UK, the US and EU.

“This is a path-breaking initiative to support SA’s pathway to a low carbon economy and climate resilience society. Another area SA would like to expand is that of education and skills development.”

Scholz said he looked forward to the discussions.

Reasons to be optimistic about the future of global health

An unparalleled focus on health from all stakeholders, new structures and systems, AI and big data, mean there’s much to be optimistic about for the ...
Opinion
1 month ago
Next Article