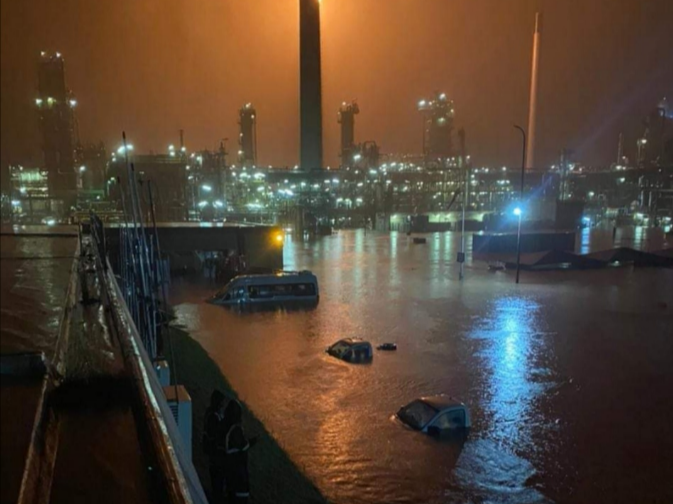 Sapref is forging ahead with its cleanup of contaminants that washed up onto beaches close to the south Durban site during April’s devastating floods.

The huge refinery site was not spared by the torrential rainfall that wreaked havoc in Durban and surrounds.

“The heavy rains and damage to the Umlaas Canal wall led to Sapref being flooded, with water levels reaching 2m-3m across the site. This resulted in extensive damage to equipment and infrastructure, including plant, roads, IT systems, electricity and water systems,” Sapref said on Monday.

The flooding took place while SA’s largest crude oil refinery was in the final stages of shutting down for a planned maintenance period.

“The hydrocarbon inventory in the units was at a minimum. The units that were still online tripped due to floods, resulting in some flaring of light hydrocarbons on the night of April 12 that continued into April 13.”

Hydrocarbons are the principal constituents of petroleum and natural gas.

“A few tanks were left visibly tilting at the storage area. These tanks were almost empty. Some hydrocarbons in open oil recovery systems and waste dams, as well as drums and vehicles, were washed from the site and surrounding areas onto the adjacent beach. There was a significant impact to the coast south of the canal up to Tiger Rocks beach.”

An assessment of the environmental effect was conducted.

“This was followed by a cleanup of the affected beach as well as the canal. The Sapref canal and Isipingo estuary were sectioned off to prevent further contamination. To date, 90% of the contaminated debris has been removed from the beach, estuary and mangroves,” Sapref said.

“All relevant environmental authorities were notified of this flooding event and Sapref is working under their direction as the cleanup progresses to completion.”

Race against time to fix rail cargo crisis after floods

The costs are compounded by Airports Company SA, which is refusing to waive the extra landing and handling fees airlines accrued from landing at two ...
Business
1 month ago
Next Article