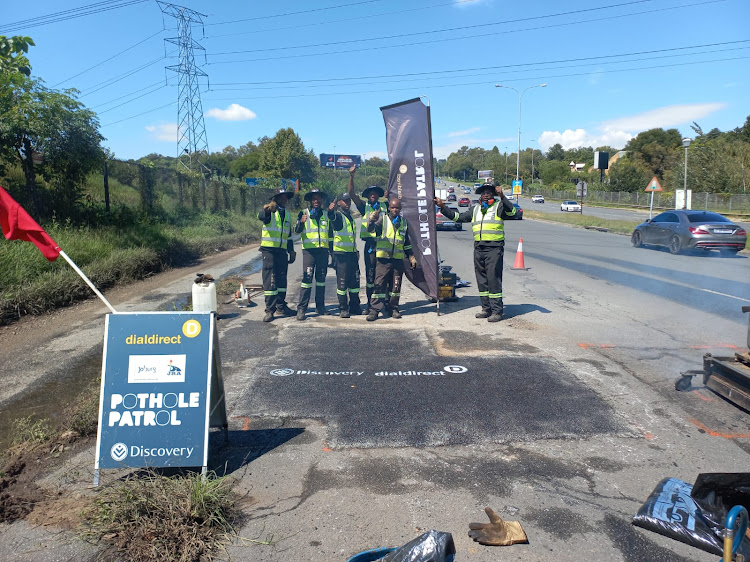 The Pothole Patrol, a partnership between the City of Johannesburg (CoJ), Discovery Insure and Dialdirect Insurance, has repaired more than 100,000 potholes since its launch in May 2021, executive mayor Mpho Phalatse announced on Monday morning.

“The City of Johannesburg is proud to partner with Discovery Insure and Dialdirect Insurance to ensure our roads are of a good quality and safe. As we build a city of golden opportunities, we must get the basics right, and this includes repairing and maintaining aged infrastructure. We will only build Joburg with the help of businesses, residents and other spheres of government,” said Phalatse.

The Pothole Patrol launched an App to simplify the reporting process for Joburg residents  in October, and that accelerated the programme’s output.

“While the unprecedented wet weather unfortunately exacerbated the already dire pothole situation in Johannesburg, and an unexpected bitumen shortage has caused a few delays, we’ve successfully managed to exceed our mandated repair target 25% month on month. We have also increased our repair fleet and employed additional resources to help manage the increased number of reports,” said Anneli Retief, head of Dialdirect.

Anton Ossip, CEO of Discovery Insure, said the introduction of The Pothole Patrol in Johannesburg had paid dividends in the form of reduced pothole-related insurance claims.

“In March we announced that the benefits of this initiative are evident in Discovery Insure data, which shows a 26% reduction in pothole-related claims in Johannesburg, compared to an increase of 45% across the rest of Gauteng,” said Ossip.

Commenting on Roodepoort, the area with the most potholes, Johannesburg Roads Agency (JRA) CEO Siya Nodu indicated that it was one of the oldest suburbs, and as a result most roads had passed their design lifespan.

The Pothole Patrol received a high number of reports from the following arterial roads:

“Reinstatements, road excavations, deep trenches or cracks are caused by entities and other service providers, either repairing or installing their services, and are not classified as potholes,” said Nodu.

“The Pothole Patrol escalates reinstatements to the JRA as per our mandate. We have recently entered into a framework agreement with Joburg Water to repair all reinstatements done as a result of water pipe leaks.”

Joburg road users are encouraged to report potholes via the COJ call centre  on 0860-562-874 or Pothole Patrol App available at the Apple App Store and Google Play Store.

Pothole Patrol is a success story despite a few challenges

The public-private partnership has fixed more than 88,000 potholes in Johannesburg
Life
4 months ago

The project in Johannesburg has reduced applications linked to road damage by 26%, company says
Companies
5 months ago
Next Article