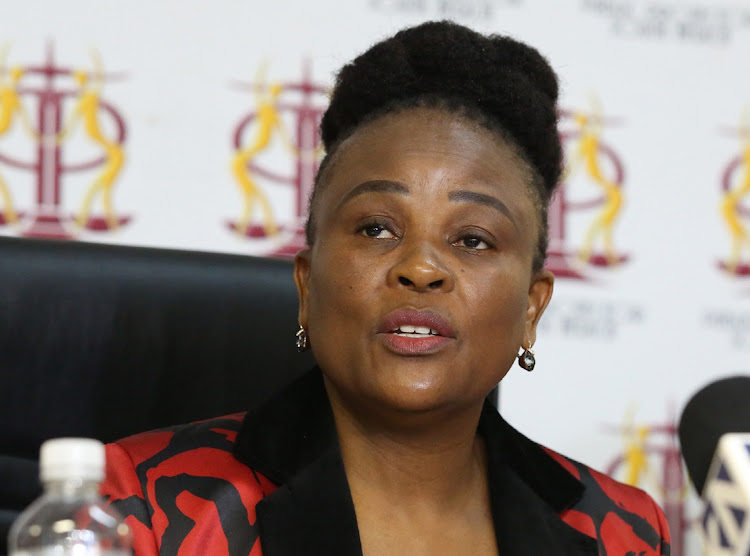 In a first for the Constitutional Court, the public protector has applied to the court to rescind its order of last week in which it refused to rescind its previous judgment against her.

The February judgment of a unanimous Constitutional Court cleared the way for an impeachment process against public protector Busisiwe Mkhwebane in parliament. Though she had already once applied for its rescission‚ that application was dismissed last week.

But in an affidavit‚ Mkhwebane said the rescission order‚ coupled with a letter from the Constitutional Court rejecting her request for more information about an investigation into an alleged leak from the top court‚ have necessitated her coming back to the apex court to overturn the rescission order.

“If left unchallenged and uncorrected‚ [these developments] will only lead to multiple and gross violations of my constitutional rights‚ as well as the permanent undermining of the independence and integrity of our judiciary and democracy‚” said Mkhwebane.

On the alleged leak‚ she was referring to the sms sent by Ismail Abramjee to counsel for the speaker of parliament Andrew Breitenbach in a separate but related case in the Western Cape high court on April 24.

In the sms‚ Abramjee said he had it “on very good authority” that the Constitutional Court had decided to reject Mkhwebane’s rescission application and would be announcing that decision before the coming Friday‚ which would have been April 29.

When her lawyers wrote to the Constitutional Court about the sms‚ the court responded that it would investigate the allegation and “the outcome of the application for direct access and rescission will be communicated to the parties when the court has finalised its processes and made its decision”.

When she followed up and asked detailed questions about the investigation‚ “to my utter surprise and further ... complete shock”‚ her attorneys instead received the rescission order and the letter‚ which‚ in a single line‚ refused to engage “in further correspondence of this nature with a litigant”.

Mkhwebane said in her affidavit: “The current factual matrix cries out for a fully reasoned judgment‚ as well as a full and meaningful response to my letter to the chief justice. I am entitled to these as of right and/or reasonable expectation.”

Mkhwebane said that the responses of the Constitutional Court were inconsistent‚ at first thanking her for bringing the sms to its attention‚ but then refusing to engage further. This conduct was “reminiscent of irrational and/or unreasonable conduct‚ which leaves me legally stranded‚ helpless and unable to address the prejudicial condition in which I find myself due to the criminal conduct referred to above‚ which I certainly did not invite upon myself”.

She has also asked the apex court to declare that chief justice Raymond Zondo’s conduct in authorising the rescission order‚ before the outcome of the investigation‚ to be invalid and unconstitutional.

The public protector's lawyers have written to the registrar of the Constitutional Court to ask if it is true that the apex court will this week ...
National
4 weeks ago

Two independent sources have confirmed that the ‘unfortunate development’ was a text message sent to counsel for the speaker of parliament, Andrew ...
National
4 weeks ago
Next Article