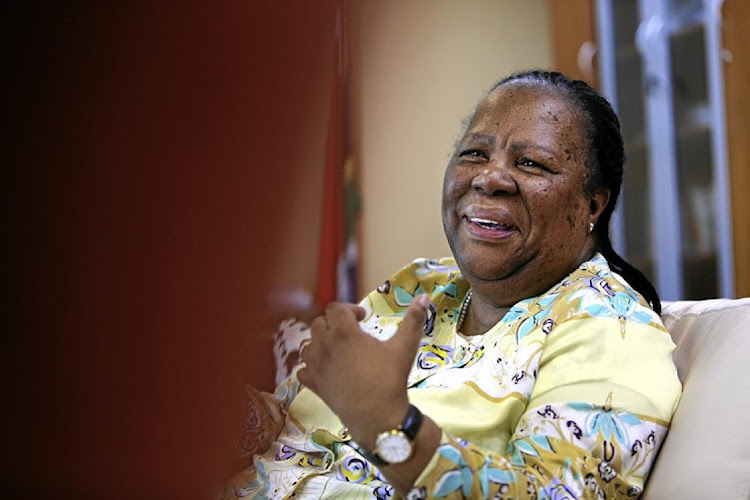 International relations minister Naledi Pandor worries the UN General Assembly is being abused as a "tool of war" over the Ukraine crisis. Picture: ALON SKUY

“Constantly poking a bear that is injured merely serves to make that bear more angry and more reckless,” she says.

In a briefing on Friday morning, Pandor explained SA’s abstention on a UN General Assembly resolution temporarily suspending Russia from its human rights council. “We adopt an independent view as to how we vote. We cannot be directed as to how we should vote on behalf of SA,” she said.

Pandor had doubts about the source of the resolution. “Its origins are somewhat suspect from what we’re hearing but this, for me, is speculation and rumour. I don’t have facts as to its origin,” she said.

Pandor insisted SA would not take instructions on how to vote in UN motions. She worried the global body was being abused. To her, the resolution passed in the General Assembly on Thursday formed part of an “aggressive discourse” which expanded hatred and conflict.

“You can’t use UN instruments as tools of war. They are there to achieve peace and security for the world. That would be why we would abstain,” she said.

So far, SA has abstained from three UN resolutions tabled since March 2 over Russia’s invasion of Ukraine. Pandor said SA was “not indifferent” to Ukrainians’ suffering and death. She said the “non-aligned position” did not amount to condoning military action. “We are extremely worried about the deteriorating humanitarian situation,” said Pandor.

Russia has been waging war on Ukraine for six weeks. Civilian casualties, and allegations of war crimes and human rights atrocities are mounting.

Pandor said President Cyril Ramaphosa was fully appraised of SA’s abstention before the UN vote was taken on Thursday. “We did speak and agreed on the position that we would take. So, there is no difference of opinion,” she said. The international relations minister and president “work very close together,” with Pandor guided by Ramaphosa. SA’s voting was driven by a peaceful objective, she continued.

“I indicated this to the various foreign ministers who’ve called me to ask us to vote in support: I’m worried that if we place Russia outside of institutions of global governance we are almost giving a license to say, ‘Do what you will,’” Pandor said.

She detected “tectonic shifts in global affairs” and volatility in the world economy. “We have resisted in our responses in becoming embroiled in the politics of confrontation and aggression that have been advocated by the powerful countries,” said Pandor.

It was, Pandor continued, urgent that “hostilities” de-escalate with dialogue, mediation and diplomacy to follow. “When a country that is party to such conflict and hostility is placed at the margins of international bodies, the level and opportunity for increased lack of accountability is just too open for us.”

In what could be a shrouded criticism of sanctions, Pandor denounced “isolating one party or seeking to bring it to its knees” as a hindrance to a sustainable solution. “SA stands ready to be in support of a peaceful resolution of the conflict in Ukraine with the intention of bringing the violence to an end as speedily as possible,” she said.

Pandor praised Turkey’s president Recep Tayyip Erdogan for his attempted mediation. Turkey hosted talks between Russia’s foreign minister Sergei Lavrov and his Ukrainian counterpart Dmytro Kuleba on March 10. “We do believe that we should all urgently advocate for a cessation of hostilities because the human toll is just terrible,” she said.

Andre Groenewald, SA’s ambassador to Ukraine, Georgia and Moldova, said Ukraine was in a “very dangerous situation” and there were growing concerns about looting, which informed curfews in parts of that country.

Groenewald said the embassy was in touch with South Africans who remained in Ukraine out of choice, and had encouraged them to develop evacuation plans. “We are aware and in contact with about five families ... all of them are safe, they are in contact with us, and tell us they at this stage don’t want to go out,” said Groenewald.

He said most of the 52 South African medical sciences students already evacuated from Ukraine wanted to continue their studies in SA. Groenewald said SA’s ambassador to Hungary was in an “ongoing process” to establish a bursary scheme for those forced to halt their studies in Ukraine to resume them in Hungary.

Ramaphosa must listen to both sides in Russian-Ukranian war, Ukraine’s ...

Ramaphosa must listen to both sides in Russian-Ukranian war, Ukraine’s ...