Zulu royals fight on over king despite Ramaphosa’s nod 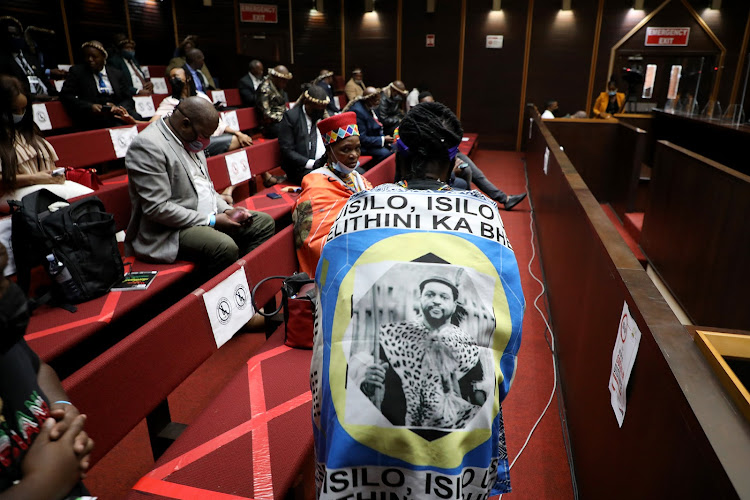 A faction of the Zulu royal family is appealing King Misuzulu KaZwelithini's elevation to the throne. Picture: SANDILE NDLOVU

A faction of the Zulu royal family opposed to King Misuzulu KaZwelithini is appealing against a court judgment that elevated him to the throne.

On Wednesday, President Cyril Ramaphosa announced that he formally recognised Misuzulu KaZwelithini as king of amaZulu — removing the last hurdle for him to replace his late father. But that did not deter those who are challenging the legality of his appointment.

In papers filed at the high court in Pietermaritzburg on Thursday, Prince Mbonisi Zulu, the late king’s brother, said: “The court erred in finding that whether such a will was vitiated by fraud and forgery as alleged was not relevant to the process of the Zulu royal family for selection, identification and nomination of a person to the Zulu throne.

“A higher court will find that the status of the wills was relevant to the process of section 8 (1) a (i) of the Traditional and Khoi-San Leadership Act read with 17 (3) of the KZN Act that there was a will expressing a wish by His Majesty King Goodwill Zwelithini KaBhekuzulu,” the submission read.

This refers to a court finding that the two wills, which placed Misuzulu KaZwelithini as top contender to the throne, were irrelevant to the selection, identification and nomination of an heir.

In a disputed will, Zwelithini KaBhekuzulu nominated his wife, Queen Mantfombi Dlamini-Zulu, as the regent, but she died less than a month after him.

In her will, she had nominated her son Prince Misuzulu as the next king of amaZulu.

Prince Mbonisi’s co-applicants contend that King Zwelithini’s will was forged and therefore not a true reflection of his wishes. Prince Mbonisi argues that another court might grant an interdict to halt its execution until its authenticity is fully tested.

“A high court examining the traditions and customs of the Zulu kingdom will also find that it was necessary to interdict the coronation of Prince Misuzulu, pending determination of the lawfulness of Queen Mantfombi,” Mbonisi said in the papers.

Judge Isaac Madondo also found that the princesses “do not have the full required interest in the identification, appointment and coronation of Prince Misuzulu”. This refers to the legal validity of a meeting at which Misuzulu KaZwelithini was nominated as the next king, in the absence of some royal family members who went on to challenge the decision in court and lost.

“The princesses form part of the core royal family. To find they have no legal interest in identification, appointment and coronation of Prince Misuzulu is not only legally wrong but factually incorrect.”

Prince Mbonisi said their challenge was designed to ensure that the legal interests of the Zulu royal family comply with the law.

Prince Mbonisi submitted that the legitimacy of the Zulu kingship affects more than 6-million citizens and, if the legal questions “relevant to the legality of the procedure” for the appointment of a king are unsatisfactorily resolved, it would sow divisions within the royal family, with far-reaching consequences for the stability of the kingdom.

“The nature of the case and the questions that it raises cry out for the attention of a higher court, including the Constitutional Court.”

Prince Mbonisi stated that depriving members of the Zulu royal family of the right to participate in the selection, identification and nomination of a person to the position of king violated their rights to dignity in section 10 and section 30 of the constitution.

Respondents in the matter include Ramaphosa and KwaZulu-Natal premier Sihle Zikalala.

Zikhalala on Thursday welcomed the president’s decision, saying it would help bring stability to the throne and the province. “This decision will bring stability and certainty regarding the Zulu throne. The Zulu kingdom occupies a special place within the global community because of the heroic deeds of a successions of kings who fought valiantly for the restoration of the dignity of the African people,” said the premier.

Meanwhile, preparations for the coronation are under way.

Update: March 17 2022This story has been updated with additional information.

Royal family had named the prince as monarch in terms of customary law and customs, says presidency
National
5 months ago

South Africans protest Russia's invasion of Ukraine as war rages and refugees flee to neighbouring states,  a court rules on Zulu royal claim, and ...
Life
5 months ago
Next Article