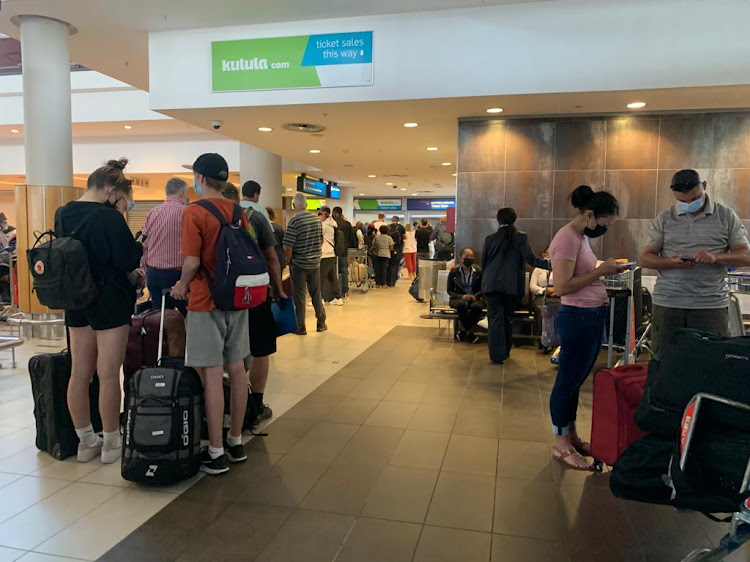 Passengers queue at the Kulula and British Airways counter at Cape Town International Airport after flights were grounded for safety reasons on March 12 2022. Picture: ESA ALEXANDER

The SA Civil Aviation Authority (SACAA) on Saturday said it had grounded Comair’s Kulula and British Airways flights after a series of midair emergencies in the last few weeks.

Comair announced earlier that none of its flights would operate for the next 24 hours after they were suspended by the aviation regulator — a move which it said was “unjustified”.

The regulator, however, said Comair has to prove its planes are safe or risk being grounded indefinitely.

Passengers queue at the Kulula and British Airways counter at Cape Town International after flights were grounded for safety reasons by SA Civil Aviation Authority. The regulator, said Comair has to prove its planes are safe or risk being grounded indefinitely. @TimesLIVE pic.twitter.com/1xxTjYWMn6

“This decision was reached after an investigation into the recent spate of safety incidents at the operator,” it said in a statement.

“This is a precautionary suspension for a period of 24 hours, within which the operator must demonstrate to the regulator that the risk and safety management systems are effective in managing potential hazards.”

On February 10, shortly after taking off from Lanseria in Johannesburg for a flight to Cape Town, one of the two engines failed on a Kulula Boeing 737-800. The pilot issued a Mayday call and the plane and its 157 passengers landed safely at OR Tambo.

Ten days later, British Airways flight BA6252 had to make an emergency landing at King Phalo Airport in East London shortly after it had left for Johannesburg.

The airline said the landing gear had failed to retract. A video shot inside the plane showed passengers crying and praying. Eastern Cape premier Oscar Mabuyane was also on the flight.

Last week, another Kulula flight was forced to divert to OR Tambo from Lanseria after an “engine-related” issue. The airline confirmed that flight MN451 landed safely and that passengers were accommodated by British Airways.

Addressing these incidents on Saturday, the SACAA said: “Just in the past month, Comair operations experienced occurrences ranging from engine failures, engine malfunction and landing gear malfunctions, among others.

“In the interest of safety, the SACAA visited the operator to investigate and determine if Comair is in compliance with applicable civil aviation regulations.

These investigations revealed three level one or “high risk findings” which called for the immediate suspension of flights.

The investigations also found one level two finding which would have led to the airline being given seven days' notice of grounding.

“Failure of the operator to produce satisfactory evidence to the regulator led to the decision to impose a precautionary suspension of the operations to give the operator an opportunity to demonstrate that their systems are able to prevent and avert safety hazards,” said the SACAA.

“The operator has until Sunday morning to meet the requirements from the regulator, failing which the approval will be suspended indefinitely, pending the satisfactory closing of the findings.”

The recovery of inbound leisure travel was effectively delayed for a year when countries around the world placed SA on their red list over Omicron, ...
Business
4 months ago

What SAA can learn from Gidon Novick’s Lift airline