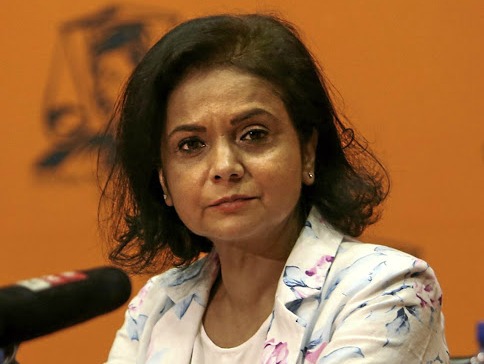 Batohi was addressing the committee on Tuesday to report on cases referred to the NPA by the Special Investigating Unit (SIU).

Authorities were heavily criticised when it emerged that Steinhoff would pay for a forensic investigation by PwC into accounting irregularities.

EFF MP Veronica Mente had asked Batohi about the perceived biases that would come with funding from the private sector.

“There is already a very dark cloud hanging over the justice system in terms of the finalisation of cases and how they deal with different cases. If you receive money from private people, yet you have to prosecute them, this is exactly when the justice system is going to start having eyes [on it],” said Mente.

“It doesn’t matter how much you say you want to set up a committee somewhere that’s going to oversee whoever brings the money in, and the money is going to land at Treasury and all those things. If people put in money for the mandate of justice and not government, then ... we run the risk of them not being prosecuted for whatever they have done.

“It cannot be that Treasury does not have enough money to cover the justice system, given the high rate of crime that has to be prosecuted at your level.”

Batohi defended the intention to have private people fund the NPA.

“I would urge members to have an open mind in this regard. We certainly do not want to accept funding from entity X when entity X is the subject of a prosecution. That is certainly not the way we envisage the concept around receiving assistance from the private sector,” said Batohi.

She said they proposed setting up a trust into which people would make anonymous donations.

It was not a new phenomenon, Batohi said, as business had been helping the government for many years, including with the setting up of the specialised commercial crime courts.

“We would not want to open the NPA to criticism that we are not prosecuting certain entities because they are funding us,” said Batohi, adding that they would be looking at safeguards in relation to the funding, understood the challenges and appreciated the risks that came with accessing private funding.

The first two state capture reports show the way to greater accountability in SA. But for justice to be done, the NPA needs to score some successes — ...
Features
4 months ago

NPA looks to resolution of disputes without trial

NPA looks to resolution of disputes without trial