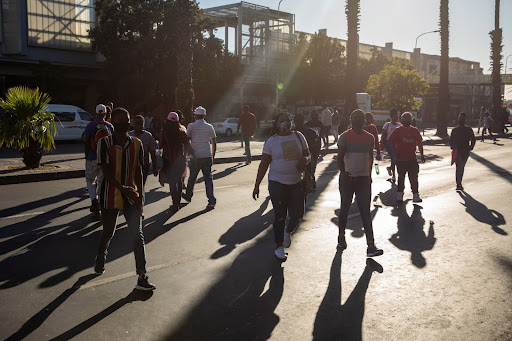 SA is is projected to spend R222bn on social grants in the year to end-February, mostly in the form of child-support stipends and pensions, even before the proposed introduction of a basic income grant. Picture: BLOOMBERG

A panel of economic advisers appointed by President Cyril Ramaphosa have warned against implementing a basic income grant, saying the multibillion-rand cost could deepen debt and hinder economic growth.

As recently as September, Ramaphosa has said that a basic income grant — which would be the biggest of its kind globally if implemented — should be considered to alleviate poverty. That statement has put him at odds with his finance minister and business organisations that say the proposal is unaffordable.

“Our vision must be to promote employment rather than ever-increasing state-funded income support,” the Presidential Economic Advisory Council (PEAC) said in a briefing note sent to Ramaphosa and seen by Bloomberg. “We face a real danger of policy error at a macroeconomic level where we will limit our economy’s growth and job-creation potential by increasing the system of social grants payments in an unsustainable manner.”

Calls for the introduction of a basic income grant from civil society organisations and labour unions have increased after the government agreed to a temporary R350 monthly payment to the unemployed because of the impact of the Covid-19 pandemic, that has worsened SA’s crippling unemployment rate.

The World Inequality Lab, which is backed by French economist Thomas Piketty who is known for his work on income and wealth inequality, said in a study that inequality in the country hasn’t improved since 1994 and the richest 3,500 SA adults own more than the poorest 32-million people.

Tyrone Seale, a spokesperson for Ramaphosa, declined to comment.

The PEAC, which Ramaphosa appointed in 2019, said a study into the feasibility of a basic income grant commissioned by the government last year failed to assess the impact on the economy that the required increases in taxes and debt would have.

“What if the proposed increased taxes limit growth and job creation slows even further?” the PEAC said. “What if South African fiscal policy loses credibility and the spreads in our borrowing costs rise higher and an even greater proportion of our revenues must be paid to bondholders?”

The government spends 3.3% of GDP on social support — a greater proportion of its revenue than most countries — and is projected to spend R222bn on social grants in the year to end-February, mostly in the form of child-support stipends and pensions. Before the Covid support payments, there was no allocation for the unemployed.

The PEAC said that the Covid-relief programme must end. Extending the Covid grant alone for a year would cost R35bn rand, BNP Paribas said. That payment is set at a level that’s about a quarter of the government’s own upper bound poverty line.

Expanding welfare payments in an unaffordable manner “would constitute a significant economic policy error — an error which would be difficult to correct and an error which would undermine the country’s overall growth and employment creation objectives,” the PEAC said.

CLAIRE BISSEKER: Tax hikes on the cards if government cave in on Covid-19 grant

CLAIRE BISSEKER: Tax hikes on the cards if government cave in on Covid-19 grant