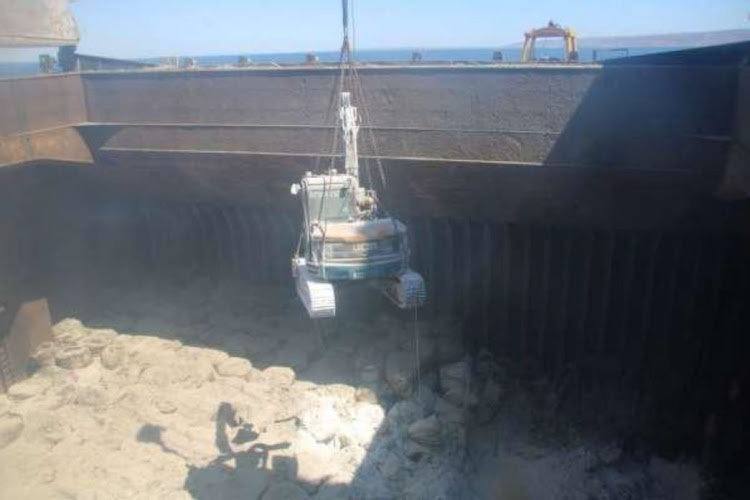 An excavator is lowered into the bulk carrier NS Qingdao to remove its chemical cargo. The remaining cargo is to be dumped 250km offshore. Picture: SA MARITIME SAFETY AUTHORITY

About 1,500 tonnes of chemicals aboard a bulk carrier will be dumped off the West Coast, the SA Maritime Safety Authority (Samsa) said on Thursday.

The undisclosed chemicals, will be dumped 250km offshore in waters more than 3km deep.

The cargo on board the NS Qingdao, which left Durban port in November and started emitting toxic fumes shortly afterwards.

The vessel was later escorted to a safe anchorage off St Helena Bay to ventilate its hatches.

More than 1,000 tonnes of its cargo have been removed and Samsa said it had obtained an emergency permit from the department of forestry, fisheries and the environment to dump the remainder at sea. That is expected to happen by March 15.

Dumping operations would depend on the weather and the “highest levels of safety standards” would be maintained, Samsa said.

“The vessel has no obvious structural damage and she will return to the closest port after the dumping operation is complete and her cargo is stabilised. An investigation will be conducted to determine the reason for the cargo reaction,” Samsa said.

“Structural specialists will conduct an assessment to ensure that the integrity of the vessel is intact before allowing her to sail to her destination.”

The 57,000dwt NS Qingdao was built in 2011 and sails under the Marshall Islands flag. It arrived in Durban from Gwangyang, South Korea, in mid-October and was evacuated about a month later.

It looks like more of the same for Africa in 2022, as long-running conflicts drag on, post-coup transitions are delayed and the continent gets set ...
Features
6 months ago

Houthi spokesperson says ship was carrying military equipment and was engaged in ‘hostile acts’, while Saudis says its cargo was hospital equipment
World
7 months ago
Next Article