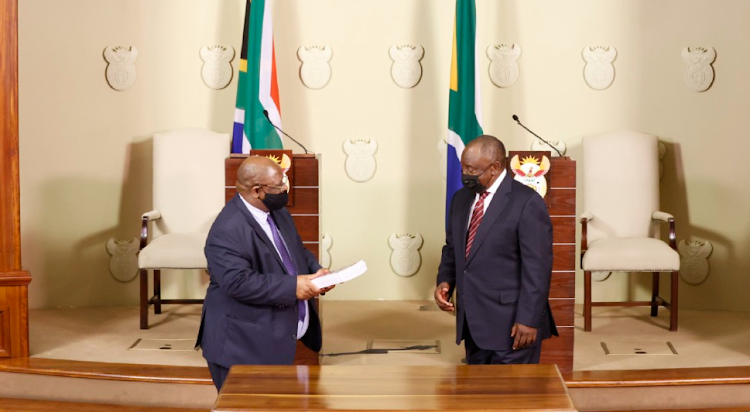 The Zondo commission has recommended the establishment through legislation of an independent agency against corruption in public procurement.

This recommendation formed part of the first report of the commission which was handed to President Cyril Ramaphosa on Tuesday.

The function of the proposed agency would be to initiate measures to protect procurement systems from corruption, issue guidelines for the betterment of procurement practices, prohibit any practices which facilitate corruption, fraud or undue influence in public procurement and protect and incentivise whistle-blowers.

The agency would also implement measures to increase the integrity and transparency of public procurement practices. It would issue reports detailing the nature and extent of fraud, corruption and undue influence which it identified.

The agency would be subject only to the constitution and the law and would consist of a council of five members with the chairperson being a senior legal practitioner with expertise in procurement matters. The members of the council would be selected by the chief justice, the auditor-general and the minister of finance after a public process.

The agency would also consist of an inspectorate, litigation unit, a tribunal and a court.

The commission has also recommended that government in consultation with the business sector draw up a national charter against corruption in public procurement.

The charter should include a code of conduct setting out the ethical standards that should apply in the procurement of goods and services for the public. Both the charter and the code of conduct should be given legal status by way of an act of parliament.

Every procurement officer in the public service will be required, on assuming duty, to sign a commitment to observe and uphold the terms of the national charter, and every person or entity tendering or contracting to supply goods and services by way of public procurement will also have to sign a similar commitment to the charter and its code of conduct.

The commission has also recommended that legislation be introduced or amended to ensure that anyone exposing corruption, fraud or undue influence in public procurement be given the protection stipulated in the UN Convention Against Corruption.

Whistleblowers should be rewarded for giving information by getting a percentage of the proceeds recovered on the strength of the information they provided. Immunity from prosecution should be given to those who honestly provide information which might incriminate them.

Another recommendation is that the Political Party Funding Act be amended to criminalise the making of donations to political parties in the expectation or with a view to the granting of a tenders or contracts as a reward for or recognition of the donations.

A further recommendation is for government to introduce legislation for deferred prosecution agreements by which the prosecution of an accused corporation can be deferred on certain terms and conditions where the company has self-reported facts for which they could be criminally implicated. The tribunal of the agency would sanction the terms and conditions agreement.

National Treasury should set standards of transparency and integrity for compulsory inclusion in every procurement system of public entities.

Accounting officers should not be criminally or civilly held liable for anything done in good faith unless they were negligent.

The Prevention and Combating of Corrupt Activities Act should be strengthened insofar as it deals with the prevention of bribery.

Acting chief justice Raymond Zondo is due to hand over the first of three parts of the report to the president at 3.30pm
National
5 months ago

Starting point for any scheme of reform must include the establishment of a single, multifunctional, properly resourced and independent ...
National
5 months ago
Next Article