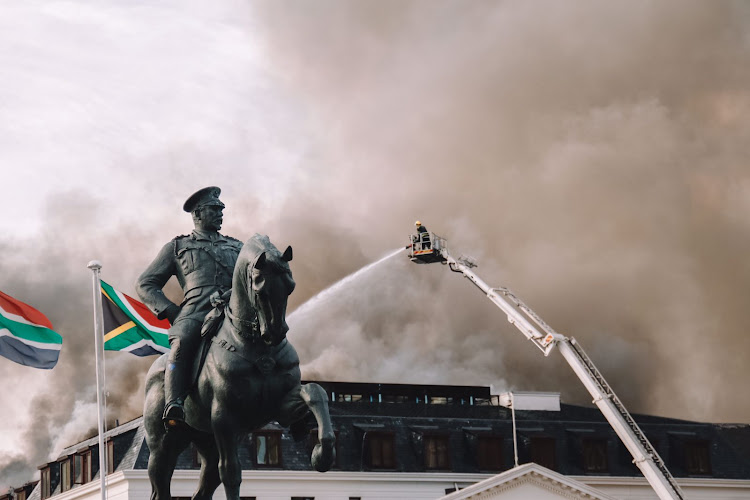 Firefighting reinforcements had to be called in on Monday afternoon as the fire at the parliament buildings flared up again. Picture: MARYAM ADAMS

More than four years since parliament’s then head of security Zelda Holtzman was fired under a cloud, the institution says it is still trying to find her replacement — and was doing so as recently as shortly before the December recess.

Parliament, which houses the president’s, deputy president’s and ministers’ offices, as well as those of other senior government leaders, has not had a full-time head of security since Holtzman was suspended in July 2015 and later dismissed in October 2017.

“Of course it being five years since the former head of security resigned from parliament and that there hasn’t been a head of security is a matter which we are dealing with,” said National Assembly speaker Nosiviwe Mapisa-Nqakula, who was responding to a TimesLIVE question on Monday.

“Even before this fire broke out, by the time we went on recess, it was a matter which we were discussing and finding a way of resolving.”

Parliament has experienced a number of security breaches over the past few years, including burglaries at MPs’ offices, having copper stolen from its bathrooms and a senior staff member smuggling in a firearm, which he used to take his life at his office.

Opposition MPs have previously blamed the head of security vacancy and the resulting lack of accountability for some of the security lapses.

On Monday, Mapisa-Nqakula said parliamentary bosses would engage parliament protection services and the police to account for what what happened.

“Whether it is the police who were not on duty without the knowledge of their seniors, I don’t know ... but we would have expected that when a fire started in one corner, it would have been quickly picked up and something would have been done. We believe that we would not be having the damage at the scale at which we have right now,” she added.

Mapisa-Nqakula moved to dismiss claims by the National Education, Health and Allied Workers’ Union (Nehawu) that when the fire broke out parliament’s security officers were not on duty because of a cost-cutting directive they received at the beginning of December. “I am told there isn’t such a decision,” she said.

Mapisa-Nqakula said she had sought clarity from Baby Tyawa, the acting secretary to parliament, over whether there was such a decision by the management.

It is irresponsible for the leadership of Nehawu to give an impression to South Africans that this happened because the management of parliament took a decision to cut down on the funding of security or even to cut down on personnel, she said. “It is really disingenuous on anyone.”

Mapisa-Nqakula said this was unfortunate as it was happening at a time when Nehawu had indicated an intention to disrupt the state of the nation address next month due to issues related to wage negotiations. It was also strange because the union made its statement before it declared a deadlock at the negotiations, she said.

While the speaker was adamant that all parliamentary CCTV cameras were working when the fire started, public works & infrastructure minister Patricia de Lille revealed that the cameras were not being monitored.

De Lille said this was under investigation to see why it was not picked up earlier that there was somebody in the building. “Certainly, there was a security breach and again it is the department of police that will investigate that.”