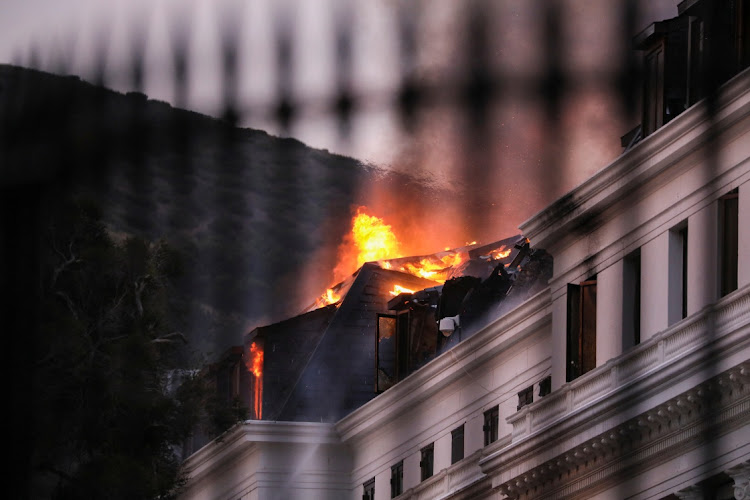 Flames and smoke rise over the roof of the National Assembly building as the fire at the parliament flared up again, in Cape Town on January 3 2022. Picture taken through a fence. Picture: REUTERS/SUMAYA HISHAM

National Assembly speaker Nosiviwe Mapisa-Nqakula says she will not take responsibility for the fire that gutted parliament on Sunday.

In a heated exchange with a News24 journalist‚ Mapisa-Nqakula said she had been in office for less than three months and therefore could not be blamed for the disastrous blaze.

“I am really sorry if you are trying to align that with the fact that I started a few months ago‚ which is two or three months ago. I am not responsible for any dropping of the ball in terms of security in parliament‚” she said.

Mapisa-Nqakula said based on a report she had received‚ all cameras in the precinct were working — contrary to a report circulating that the cameras were not working. She said this was confirmed by the acting secretary to parliament‚ Baby Tyawa‚ and a department of public works & infrastructure official responsible for cameras.

She was responding to a question on whether she would admit to having dropped the ball and would take responsibility for what happened. This was in light of poor security in parliament and in the context of previous reports that outlined potential risks and loopholes in terms of safety.

Mapisa-Nqakula said parliament was a national key point and its security was the responsibility of both its own officials and the police. She urged journalists to “try to be smart sometimes when we raise questions”.

Only certain buildings and certain venues in parliament are national key points.

“This lady here‚ at any given time‚ has always ensured that she defends the democracy she so hardly fought for. This woman here. OK?” she said‚ pointing at herself.

“And I will not take responsibility for anything that you are suggesting‚ which is that there may be charges of treason for me as speaker because parliament burnt down.”

She said that she was the one person who came out on Sunday and said that any attack‚ if there was an attack on parliament‚ would be an attack on the democracy of the people of SA.

“The implication of what you are saying is that I must take responsibility because I dropped the ball. I am here for two and-a-half months to three months ... and up until now‚ there is nothing that suggests there was dropping of the ball by parliament.”

“The assembly‚ as one of the two houses of parliament‚ occupies an important place in the history and evolution of our constitutional democracy. This is the house where over 2‚000 transformative pieces of legislation have been passed since the dawn of our democracy.”

Masondo said the National Assembly building was the third of a series of interlinked buildings. It was built between 1983 and 1985 to accommodate the expanded needs of the apartheid tricameral parliament.

Masondo said some important sections such as the NCOP chamber and office‚ the parliament library and the museum — including artworks and heritage objects and the Keiskamma Tapestry on the ground floor of the Old Assembly building — were saved.

He said multi-agency investigations were under way and would be in full swing once the building was declared safe and handed over to the investigation team.

“We wish to assure all the people in SA that we will leave no stone unturned to enable appropriate actions to be taken by all relevant authorities‚” he said.

Public works & infrastructure minister Patricia de Lille said a team of experts‚ including engineers and an architect‚ arrived in parliament on Monday to assess the extent of the damage. De Lille said the team will deliver a preliminary report by Friday morning.

She said the engineers will focus on the repairs that need to be done‚ their cost and time frames.

A fire expert had been brought in to determine exactly where the fire started‚ said De Lille.