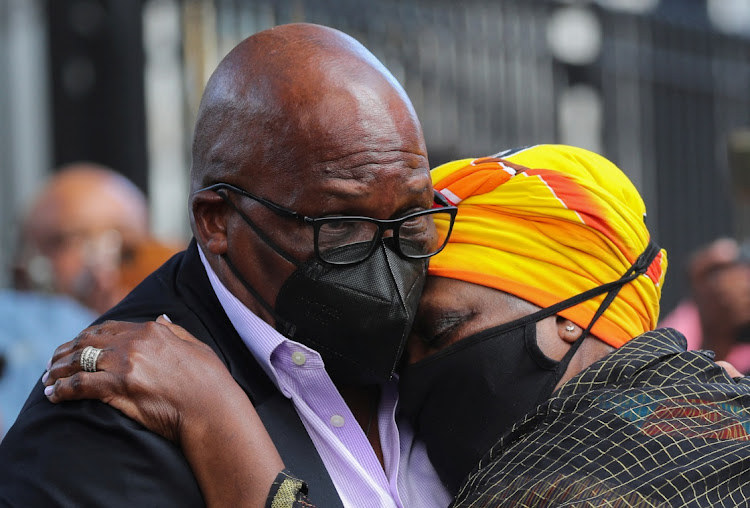 Archbishop Desmond Tutu's son in law Mthunzi Gxashe and daughter Thandeka Tutu embrace each other as the casket containing his body arrives at St Georges cathedral for his lying in state, in Cape Town on December 30 2021. Picture: REUTERS/SUMAYA HISHAM

The body of South African anti-apartheid theologian, Archbishop Desmond Tutu, arrived at Cape Town’s St George’s Cathedral on Thursday morning, where it will lie in state for two days for mourners to pay their final respects.

Tutu, a Nobel Peace prize winner widely revered across racial and cultural divides in SA for his moral rectitude and principled fight against white-minority rule, died on Sunday aged 90. 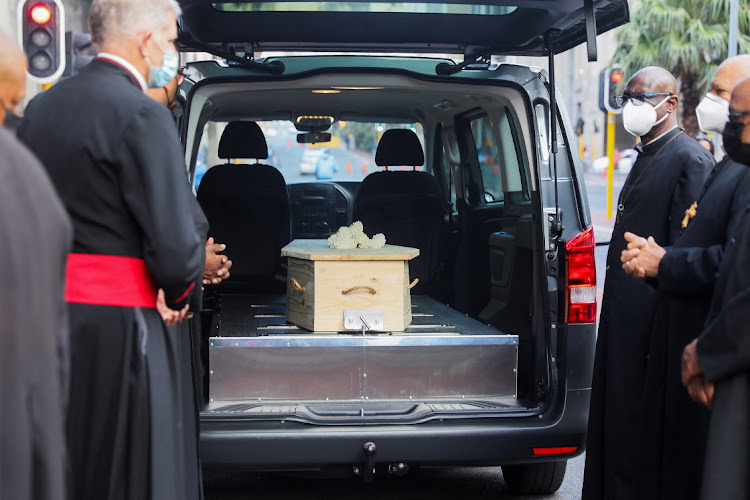 The casket containing the body of Archbishop Desmond Tutu arrives at St Georges cathedral for his lying in state, in Cape Town on December 30 2021. The Archbishop asked for a plain wooden coffin adorned simply with carnations. Picture: REUTERS/SUMAYA HISHAM

His simple pine coffin with rope handles, adorned with a single bunch of white carnations, was carried into the brown stoned-walled church that provided a safe haven for anti-apartheid activists during the repressive white minority rule.

Emotional family members met the coffin outside the church entrance, where six black-robed clergy acting as pall bearers carried the closed coffin inside to an inner sanctuary.

Tutu, who requested the cheapest coffin and did not want any lavish funeral expense, will be cremated and his remains interred behind the St George’s Cathedral pulpit he often used to preach against racial injustice.

The public will have an opportunity to view Tutu’s body between 9am and 5pm on Thursday and Friday, ahead of a requiem mass funeral service on Saturday where President Cyril Ramaphosa was expected to deliver a eulogy.

Memorial services were also planned for Tutu in Johannesburg and Pretoria on Thursday.

Tutu won the Nobel Peace Prize in 1984 in recognition of his non-violent opposition to white minority rule. A decade later, he witnessed the end of that regime and chaired a Truth and Reconciliation Commission to unearth the atrocities committed under it.

SA should pick up the baton of Tutu’s consistency in fighting discrimination and suppression of the downtrodden, says former UDF leader
Opinion
7 months ago