‘We have 337 Covid-19 positive patients admitted [and] approximately 10% are on some form of oxygenation versus 100% in the first three waves,’ the Netcare CEO said 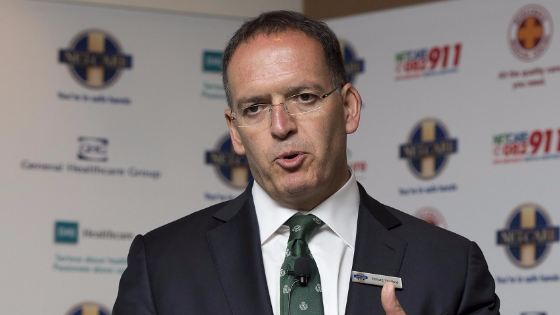 Netcare CEO Richard Friedland says on the basis of patients the hospital group has treated so far in the fourth wave of Covid-19, admissions are likely to be low. Picture: MARTIN RHODES.

Symptoms of people infected with the Omicron variant of Covid-19 are far milder than those seen in SA’s first three waves of infections, private hospital group Netcare said on Wednesday.

CEO Richard Friedland said he had personally seen many patients in Gauteng and about 90% required no oxygen therapy.

“While we fully recognise that it is still early days, if this trend continues it would appear that with a few exceptions of those requiring tertiary care, the fourth wave can be adequately treated at a primary care level,” he said.

“As of today, we have 337 Covid-19 positive patients admitted [and] approximately 10% are on some form of oxygenation versus 100% in the first three waves,” he said the day after the national positivity rate during a record-breaking surge in new infections reached 24.9%.

“During the first three waves, when the overall community positivity rate breached 26% across SA, we were inundated with Covid-19 admissions to hospital,” he said.

“However, there does appear to be a decoupling in terms of the rate of hospital admissions at this early stage in the evolution of the fourth wave.”

Friedland said Covid-19 patients admitted to hospital since November 15 were generally younger than during previous waves.

The president has again called on the nation to get vaccinated, saying it is more important than ever in the festive season
National
6 months ago

Gauteng reports the most infections, followed by KwaZulu-Natal and the Western Cape
News
6 months ago
Next Article