Greed the West has shown over Covid-19 vaccines is damning, Cyril Ramaphosa says

‘Our lives in Africa are just as important as their lives in Europe, North America and all over,’ the president says 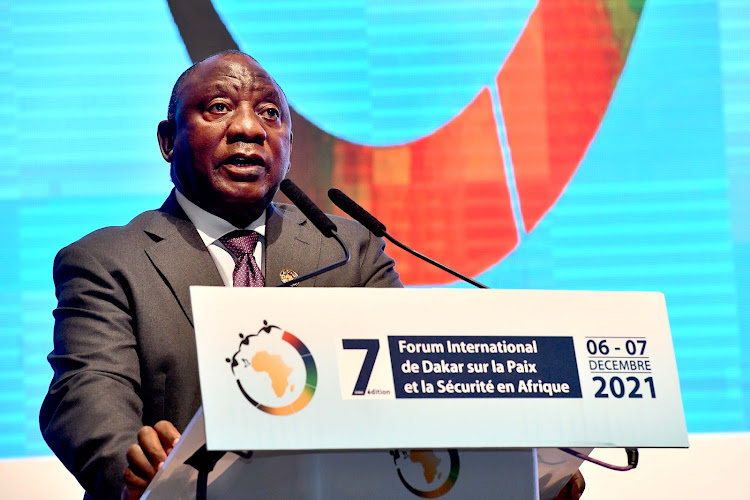 President Cyril Ramaphosa has hit out at Western countries’ knee-jerk response to the Omicron variant and hoarding of vaccines, saying they smacked of selfish behaviour.

The US, UK and other Western countries have placed countries in the Southern African Development Region (Sadc) on their red list since the detection of the variant in SA and Botswana, putting the regional economies at risk as most of them depend on tourists from those countries to thrive.

“They ordered more vaccines than their populations required and when we wanted vaccines, they kept giving us the crumbs from their tables,” Ramaphosa said as a special guest at the Dakar International Forum on Peace and Security.

“The greed they demonstrated is quite disappointing, particularly when they say they are our partners, because our lives in Africa are just as important as their lives in Europe, North America and all over.”

Ramaphosa arrived in Dakar on Sunday night accompanied by ministers Naledi Pandor, Mondli Gungubele, Thoko Didiza and Barbara Creecy on the last leg of his visit.

“The task facing us, as African nations, is to drive the recovery, but a recovery that is sustainable, inclusive and leaves no-one and no country behind. This is our bulwark against Covid-19 having negative long-term implications for peace and security in our continent.

“This is the one time that our continent approached a pandemic united, properly integrated and committed to dealing with it. It was Africa’s time of great unity.”

The president said SA and India had proposed a waiver of the WTO’s Trade-Related Aspects of Intellectual Property Rights (Trips) agreement, which would essentially facilitate access to a vaccines blueprint.

He said that that would allow countries with the capability to manufacture vaccines in Africa to do so, but until now were refusing.

“When SA scientists discovered Omicron, they immediately took on the responsibility of informing the world about it. And what is the result? The northern countries impose a ban to punish the excellence that comes from Africa.

“They are basically saying we are not going to allow you to travel, but lo and behold, Omicron is spreading all over the world, including in their own countries. Now you ask yourself, where is science? They always said to us, base your decisions on science, and when the moment calls for them to be more scientific, they are not,” Ramaphosa said.

“They resort to their own selfish interests and ban travel from Southern African countries, and we say the bans must be removed with immediate effect so that our people can travel around the world.”

Manufacturing vaccines locally is not just the safest and fastest way to access life-saving medication, it is also a critical component for economic recovery, he said.