Group claims recent studies suggest seismic surveys are harmful to large marine mammals and plankton, but the oil giant argues the studies aren’t based on actual evidence and experience 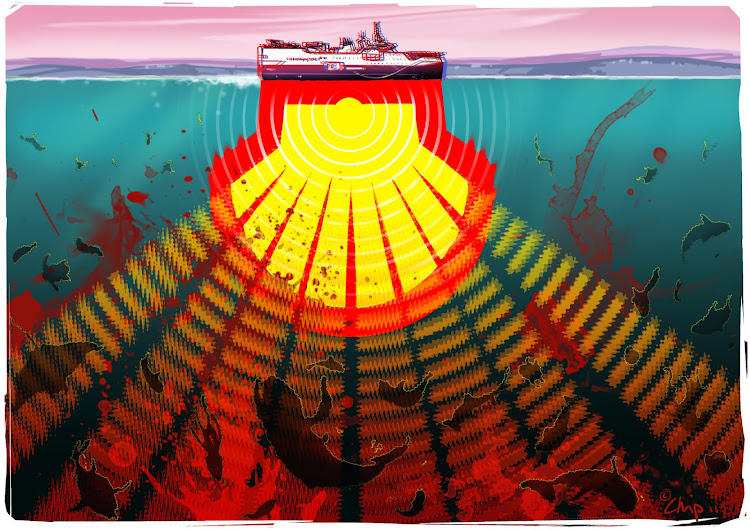 Cape Town cartoonist and illustrator Chip Snaddon is one of many artists who has used the Shell logo to criticise the company for its seismic testing off the Wild Coast. Picture: SUPPLIED

A group of SA marine scientists on Thursday urged the government to halt Shell’s seismic survey along the Wild Coast due to concerns about the impact on the environment and marine life.

Shell was due to start acoustic surveying along the Wild Coast on Wednesday, but environmental groups have applied for an urgent interdict in the Makhanda high court. Marine tracking websites showed the survey vessel is off the coast of Morgan Bay.

In a letter to President Cyril Ramaphosa and cabinet members Gwede Mantashe and Barbara Creecy, the scientists say recent studies suggest that seismic surveys are harmful to large marine mammals, like whales and dolphins, and to microscopic plankton.

“SA’s marine ecosystems, and the coastal community’s sustainable blue economies that depend on their health, are being threatened by the deployment of offshore seismic surveying,” the letter reads. “There is a growing body of evidence pointing to the immediate and long-term, and largely unmitigable, negative impacts of this invasive method on marine creatures.

Their entire case is based on speculative harm, which is belied by the actual evidence and experience of seismic surveys around the world.

“We point out that much of this evidence, and a growing global opposition to this method of surveying [it has been stopped in some countries’ exclusive economic zones], has only come to light after the granting of current permits, notwithstanding their questionable legal status,” the group said.

The Makhanda high court is expected to issue a ruling on the the urgent interdict on Friday, which could scupper Shell’s local offshore ambitions.

The oil giant’s legal representatives told the court that Shell may have to walk away from the project should it be prevented from surveying. “Their [the applicants’] entire case is based on speculative harm, which is belied by the actual evidence and experience of seismic surveys around the world,” Shell lawyer Adrian Friedman told the Cape Times.

“The seismic survey is being conducted pursuant to an economic imperative, to the benefit of the entire country, of energy security. The applicants allege that irreversible harm will be suffered, without explaining what that means.”

The scientists say there are numerous scientific and regulatory concerns with seismic surveys, including an alleged “deficiency in the current Environmental Impact Regulations” related to the technology. “This omission must be rectified before any further permits are considered,” the group said.

They have also requested a strategic environmental assessment of all current and future seismic surveys “to determine key environmental and social constraints and sensitivities”.

The group also claims the surveys, which seek to assess the viability of offshore gas extraction, contradict SA’s commitment at October’s global climate conference (COP26) to move away from hydro-carbon-based energy.

Every time I write about an ANC politician, bots pop up in my timeline like pothole repairers the month before a local election
Opinion
8 months ago
Next Article