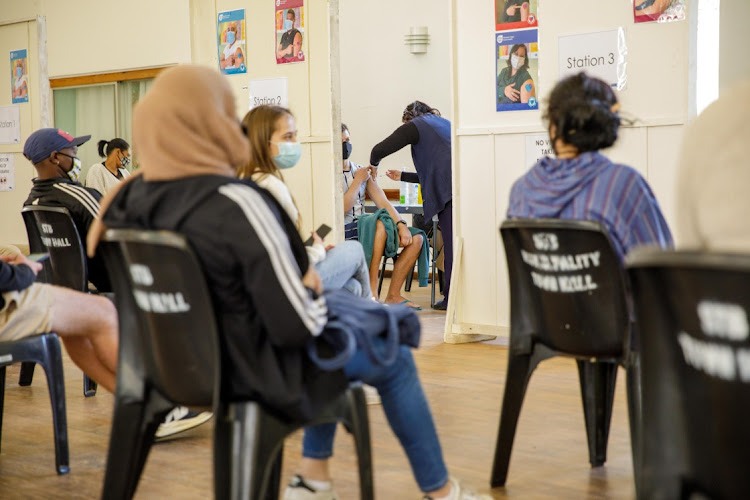 The possibility of expanded mandatory vaccination policies at businesses and educational institutions is already having an impact, with SA’s flagging inoculation drive getting a boost of almost 60% on Tuesday.

This came two days after President Cyril Ramaphosa announced that a task team had been set up to look into vaccine mandates for certain activities and locations.

The biggest increase was in Gauteng, the economic heartland, which has emerged as the main centre for the spread of the Omicron variant.

Figures from the National Institute for Communicable Diseases (NICD) on Wednesday showed that there were 8,561 new infections reported in the past 24 hours, up from 4,373 reported the day before.

The disclosure of the variant last week by local scientists saw the country face new travel restrictions, dealing a devastating blow to the tourism sector, which was looking forward to the December holidays to spark a recovery from previous bans.

Gauteng had a sharp rise in Covid-19 infections in the past week, and the threat posed by the new variant, together with campaigns aimed at fighting hesitancy in the population, may have played a role in encouraging more people to seek jabs.

The campaign has also got a boost from a growing consensus at the National Development & Labour Council, where unions are moving closer to the government and business in favouring restrictions of movement on those who refuse vaccines.

Deputy director-general in the department of health Nicholas Crisp welcomed the increase in vaccinations but said it is still a far cry from the government targets. Ramaphosa has said he wants it to be closer to 300,000 a day.

Crisp attributed the sharp rise to the rollout of booster shots for healthcare workers and a decline in vaccine hesitancy. The threat of mandatory vaccination could also have played a role, he said. “I think all of that is encouraging people, but I won’t be happy until I see the vaccination figure at about 250,000 per day.”

SA’s low rate of vaccination — only about 36% of the adult population has been fully vaccinated — provides fertile ground for a rise in infections. These in turn raise the prospect of harder lockdowns, which have been very damaging for the economy.

In his address to the nation on Sunday night, Ramaphosa said the government had established a team to investigate mandatory vaccination and was considering making compulsory vaccination “for specific activities and locations” to quell further waves of the coronavirus.

A growing number of companies and universities have introduced compulsory vaccination policies, but swathes of the economy have yet to do so.

Health and life insurer Discovery was one of the first JSE-listed companies to introduce mandatory vaccination for staff. It was soon followed by private hospital groups Mediclinic and Life Healthcare, and insurers Sanlam and Old Mutual.

Some universities, such as Wits and UCT, followed suit. The government has not yet required employees to get immunised.

Update: December 1 2021
This article has been updated with new information.

Anthony Fauci says the infected person travelled to the US from SA on November 22, and ban on flights from Southern Africa will be temporary
World
6 months ago

The variant has been found in 23 countries, the WHO says, but several more could come to light as data is analysed
National
6 months ago

Some freedoms come with trade-offs and in this case the trade-off may have to be a ‘no jab, no access’ policy
Opinion
6 months ago

Of the 19 infected people, 16 were asymptomatic, the remaining three had ‘very, very mild’ symptoms
National
6 months ago

The government is weighing up the possibility of a vaccination passport, which may prohibit unvaccinated South Africans from being able to access public services and places of employment. Alishia Seckam spoke to the head of Discovery’s Covid task team, Ron Whelan for more insight.