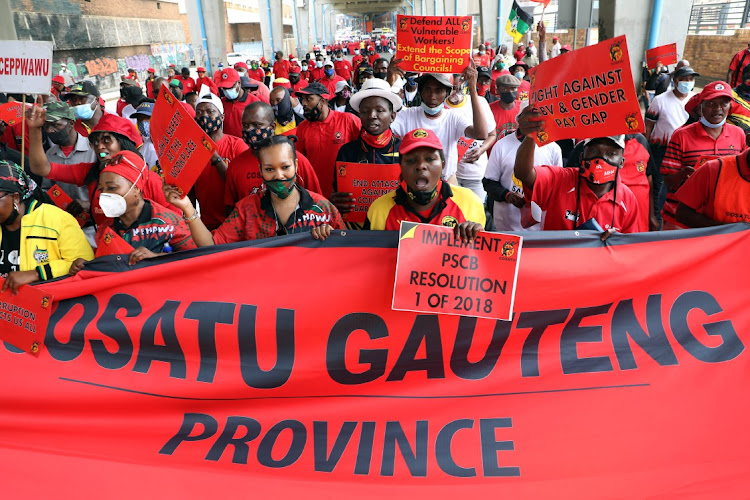 Cosatu members during their national day of action protest on October 7 2021 in the Johannesburg CBD. PHOTO: ANTONIO MUCHAVE/SOWETAN

The labour movement, a key component of the government’s plans to get the economy running optimally again, is not talking with one voice regarding plans to introduce mandatory vaccination for workplaces and public areas.

In an address to the nation on Sunday after the Omicron variant was identified in SA, President Cyril Ramaphosa said the government had been engaging with social partners on introducing measures calling for vaccination to access workplaces, public transport and other establishments.

The president said there was a “broad agreement” on the need for such measures, during discussions with social partners at the National Economic Development and Labour Council (Nedlac), a policy formulating body comprising the government, business, labour and community constituencies.

He said the government had set up a task team that would undertake broad consultations on making vaccination mandatory for specific activities and locations.

“The task team will report to the interministerial committee on vaccines chaired by the deputy president, which will make recommendations to cabinet on a fair and sustainable approach to vaccine mandates,” said Ramaphosa.

“We realise that the introduction of such measures is a difficult and complex issue, but if we do not address this seriously and as a matter of urgency, we will continue to be vulnerable to new variants and will continue to suffer new waves of infection.”

While Ramaphosa said there was “broad agreement” on the need for vaccine mandates during discussions at Nedlac, National Council of Trade Unions (Nactu) president Pat Mphela told Business Day on Monday they were wary of mandatory vaccinations.

“We told our social partners that we need to be careful, we are not for mandatory vaccinations. We need to convince communities and workers to vaccinate, and let them know the importance of taking a jab,” he said.

“Ours is to encourage workers to vaccinate. It’s unconstitutional to make it mandatory.”

Bheki Ntshalintshali, general secretary of Cosatu, which has always been against mandatory vaccinations in the workplace, said “we prefer the question of voluntary vaccinations”, when asked for comment.

However, he said Cosatu, a key ally of the governing ANC, was working with employers to make sure workers took the jab voluntarily.

Federation of Unions of SA (Fedusa) president Godfrey Selematsela said vaccine mandates were the way to go. “It’s a good move in ensuring that people do vaccinate, but we are of the view that people can do this voluntarily.” The Fedusa leadership believed vaccine mandates would help get the economy to function optimally again as workers would have no other choice but to get inoculated to access the workplace.

He said Saftu was of the view that employers should not use mandatory vaccination as a “weapon” to victimise workers by suspending and firing them.

While Saftu encouraged its members to get vaccinated and not listen to anti-vaxxers,  Shaku said: “Constitutionally, people have the right to choose what to do with their lives. But the health and occupational legislation puts the onus on employers to make sure that the workplace is a safe environment. We will announce the central committee meeting outcomes during a press briefing on Thursday.”

Labour analyst Michael Bagraim said discussions on mandatory vaccination between social partners at Nedlac had been ongoing for some time.

“Look, the constitution is clear: you have a right not to be vaccinated. What the government is talking about is making vaccination mandatory at work. They are saying certain workplaces can make it compulsory for its employees to either have the vaccine or not come to work, that is, lose your job,” said Bagraim.

He said this presented employees with two rights, to either get vaccinated and hold on to their jobs, or refuse to get the jab and lose their jobs.

“This goes to show that every right that you have is not an absolute right.”