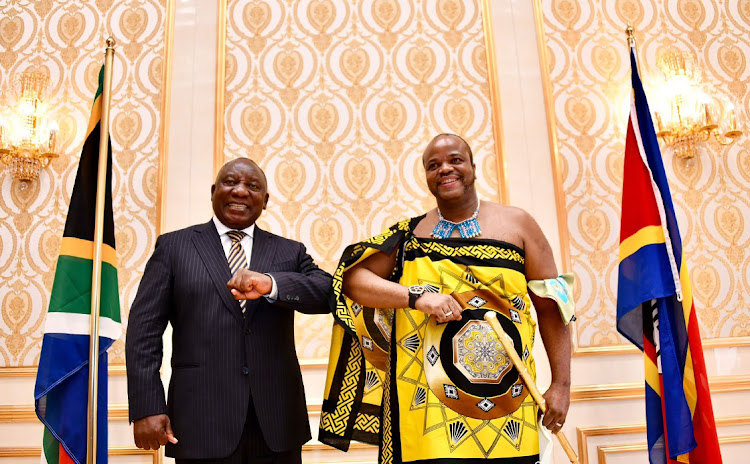 President Cyril Ramaphosa and King Mswati III discussed a broad range of matters relating to the political and security situation in the kingdom. Picture: GCIS

President Cyril Ramaphosa has announced that Eswatini will embark on a process that will work towards the establishment of a national dialogue forum.

The announcement follows Ramaphosa’s one-day working visit to the kingdom to meet King Mswati III in an attempt to bring peace in the troubled country.

Ramaphosa made the announcement in his capacity as the chair of the Southern African Development Community (Sadc) organ on politics, defence and security.

His office said: “President Ramaphosa and King Mswati III agreed that the Sadc secretariat would work closely with the government of Eswatini to draft terms of reference for the national dialogue forum. These terms of reference will specify processes for the forum as well as the composition of the forum.”

The meeting of the two heads of state follows a visit by a special envoy on October 21 and 22. Last month Ramaphosa told the Sunday Times that he sent former cabinet minister Jeff Radebe to Eswatini as his special envoy. Radebe was accompanied by representatives from Namibia and Botswana, and the delegation was assisted by the Sadc secretariat.

The move followed four months of pro-democracy protests that escalated this week. About 100 people have died in the violence, many of them killed by the military and police, according to reports.

On Tuesday, Ramaphosa met King Mswati to discuss a broad range of matters relating to the political and security situation in the kingdom.

The presidency said: “The process towards the national dialogue will take into account and incorporate structures and processes enshrined in the constitution of the kingdom of Eswatini, including the role of parliament and the Sibaya convened by His Majesty King Mswati III.

“This preparatory process will take place during the coming three months, a period during which His Majesty will undertake his annual, mandatory Incwala ceremony.”

The two statesmen were at one “in calling on all stakeholders among amaSwati to work together to end violence and conflict, and maintain peace and calm in the kingdom as work commences on the national dialogue process.”

A teacher was on a bus hired by a teachers union destined for Mbabane last week, to join people seeking to deliver a petition to fast-track cost of ...
National
1 month ago

The region should change tack and talk to everybody in the crisis, otherwise it will be another exercise in futility
Opinion
1 month ago

Members states have been arguing for weeks over the wording of a statement, sources say
National
1 month ago
Next Article