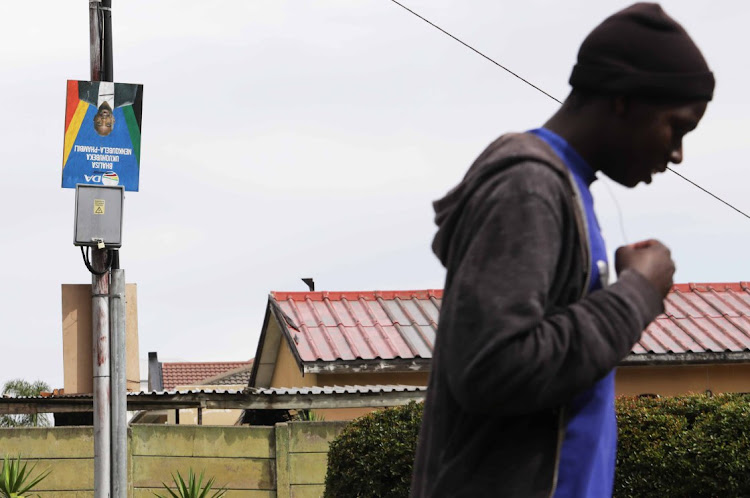 A poster of former DA leader Mmusi Maimane is seen on a pole in Rondebosch, Cape Town, on November 1 2021. Picture: SUNDAY TIMES/ESA ALEXANDER

After a campaign plagued by missteps and controversy, the rain poured on the DA stronghold of Cape Town, further damaging its electoral prospects in Monday’s election.

The turnout in Cape Town could be below 40%, said mayoral candidate Geordin Hill-Lewis several hours before polls closed, after a day of showers, some of which were torrential and blew away DA gazebos.

He expected turnout to be low in Cape Town.

While the DA is still expected to achieve a comfortable majority in the City of Cape Town, a poor turnout in the city will have a serious effect on the party’s share of the vote nationally, given its support base in the city.

The DA, which gained a record 24.57% of the vote in the 2016 election, has set its sights on achieving its 2019 outcome of 20.77%. Remaining at 20% will enable the DA to say that it has stemmed the losses it experienced in 2019 and that the party has consolidated. A poor turnout in Cape Town could jeopardise this.

The DA has also had to contend with a plethora of small parties which have sprang up purporting to advance “coloured interests” which will chip into the 66% majority it won in the city in 2016.

A round-up of election news, views and analysis from politicians, voters and commentators
Politics
6 months ago

The battle was exemplified by the competition to win Mitchells Plain where the GOOD party, led by Patricia de Lille the Patriotic Alliance, led by Marlon Daniels and the Cape Coloured Congress (formerly known as the Gatvol Capetonians Movement) were among the dozens of parties contesting wards.

“People want change. We are not black enough, we are not white enough, there are no jobs for our youth,” said a PA campaigner in Mitchells Plain.

GOOD mayoral candidate Brett Heron said that the rain had deterred many voters who would ordinarily walk to the voting station, adding that the rain will determine the outcome of the election.

ANC provincial election manager Cameron Dugmore said that the rain had affected turnout in the party’s traditional strongholds but this had improved as the weather cleared later in the day.

He also complained about the refusal by presiding offices at voting stations to accede to requests for additional streams to be introduced to expedite the process of voting. This had meant that voters were standing in queues for a long time in poor weather.

The Western Cape also experienced problems with the voter management devices (VMD) used to check registered voters often going offline, slowing down the process. There were also cases of registered voters not being on the voters’ roll.

DA chairperson for the Western Cape Jaco Londt said VMD broke down regularly and went offline and it seemed that the IEC did not have enough people to process voters at the reception point with the result that processing took a lot longer than in the previous election.

Patriotic Alliance mayoral candidate Marvin Sampson said the party had had a good turnout despite the rain. “The response among our people has been great. Our people are eager.”

About 18,000 police officers were deployed in the province, mainly to focus on hot spots like the sprawling eThekwini region and Nongoma
National
6 months ago

Former Johannesburg Mayor and ANC Gauteng Provincial Treasuer, Park Tau is among the leaders expected to make their way to Soweto on Monday night in ...
National
6 months ago