Heathrow cleared to hike fees as much as 56%, sparking outrage 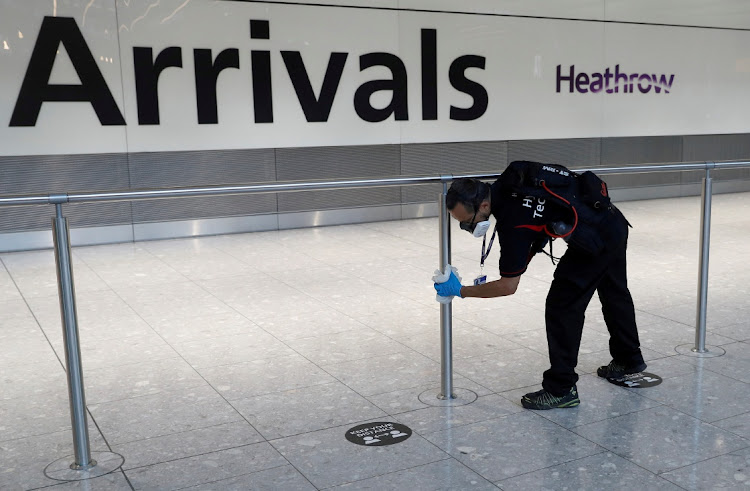 A worker sanitises a barrier at the international arrivals area of terminal 5 in London's Heathrow Airport, Britain, in this August 2 2021 file photo. Picture: REUTERS/PETER NICHOLLS

Britain will allow London Heathrow Airport to lift its charges by as much as 56%, stoking a clash with airlines which warned that higher fares will stifle a recovery at Europe’s busiest airport.

The announcement Tuesday by the UK Civil Aviation Authority sets up months of high-stakes lobbying before a final decision early next year. The hike could prove to be more modest — as little as 11% — depending on how fast traffic rebounds from the coronavirus slump now in its second year.

Heathrow has been at loggerheads with airlines after seeking to raise 2020 charges by as much as 95% to fund costs and investment. Willie Walsh, head of the International Air Transport Association and a former chief of British Airways owner IAG SA, has branded the airport a “greedy monopoly” and said its owners must accept some of the pain.

“We need a strong regulator to clamp down on what is blatant gouging,” said Tim Alderslade, CEO of industry group Airlines UK. “How on earth can it be in the interests of consumers to ramp up charges by as much as 50%?”

Airlines called on regulators to lighten the burden on passengers.

The proposals are “unacceptable” and arrive “just as international travel international travel resumes at scale”, Virgin Atlantic Airways CEO Shai Weiss said in an email. IAG counterpart Luis Gallego pointed out that Heathrow is already the world’s costliest hub and that the charges will further hurt competitiveness.

IAG shares traded 4.7% lower at 12:42pm  in London, while easyJet slid 1.3% and Air France-KLM declined 2.8% in Paris. Travel stocks are also suffering from concern about a coronavirus mutation in the UK known as Delta plus.

Heathrow said that while the CAA must protect consumers against excessive travel costs, it should not “shield airlines” from legitimate increases. The hub said it will discuss the proposals with the regulator and carriers.

CAA CEO Richard Moriarty said a final decision on fees will be based on traffic numbers as markets such as the trans-Atlantic reopen. Demand at Heathrow is expected to match 2019 levels in three years.

The regulator is introducing a new five-year control period rather than waiting for the recovery because Heathrow and its airlines say they need certainty, Moriarty said in an interview.

Acsa’s R2.6bn loss in its year to end-March is the second in its 28-year history, but it expects better days ahead
Companies
1 month ago

Iata will vote on a proposal to reach “net zero” carbon emissions by 2050, the most stringent target in the 2015 Paris agreement
Companies
1 month ago