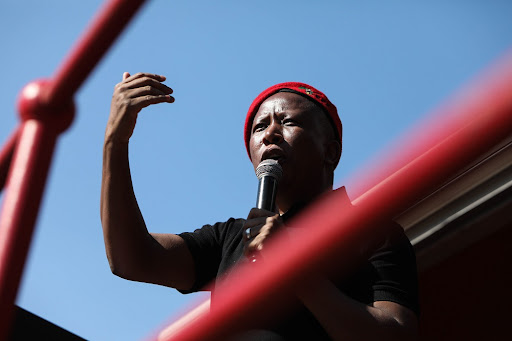 He and lawyer Dali Mpofu would be among the wealthy people an EFF government would target for the special wealth tax, Malema told supporters in Johannesburg on Sunday at the party's manifesto launch ahead of the November 1 local government elections.

“The people with big yards and big houses, we are going to tax them because they are rich. They must subsidise the poor,” he said.

“How do we determine that this person is rich. Dali Mpofu is going to be the first victim of the property wealth tax because he lives around Mandela's home in Houghton,” said Malema.

“We are going to tax them, including myself. I stay in Sandton. I must pay the wealth tax to subside the poor. That is the only practical way to share the wealth of the country.”

Malema said the EFF manifesto was based on an observation that people were landless, jobless, local government was incapable and many people in SA still did not have access to water.

The EFF launched its 2021 local government elections manifesto in Gandhi Square in the Johannesburg CBD on September 26 2021. The EFF contested elections for the first time in 2014 during the national polls and became the third most popular party in the country. EFF leader Julius Malema addressed his supporters at the launch.

“Our manifesto is based on a truthful observation that children do not have access to clean and safe recreational and sporting facilities, that instead of creating jobs for millions of jobless young people, municipalities give tenders to the connected few and our people do not have access to sanitation and proper toilets,” said Malema.

“Land and jobs manje [now]” is the party's slogan for the elections campaign. It was “land and jobs” in previous elections.

In a slew of promises with a slant towards the poor, Malema said the EFF would identify a piece of land in Sandton to build RDP houses to promote integrated human settlements.

Among the promises in the manifesto were that every EFF municipality would conduct an audit to determine true ownership details of every piece of land in the municipality, ascertain current land use, and expropriate abandoned and unused land for redistribution. Each municipality would have its own municipal land reform plan outlining municipal-based land reform targets.

EFF municipalities would establish indigent household units in the mayor's office by June 2022. Households that depended on social grants would qualify for free basic services without having to register on the indigent database.

The EFF would continue to fight for the increase of social grants, he said.

A quarter of the ANC candidates are under the age of 30 as the party looks to impress more than 433,000 new voters
Politics
7 months ago

The ANC has finally submitted its list of candidates who will contest the local government elections on November 1 after being granted an extension ...
Politics
8 months ago
Next Article