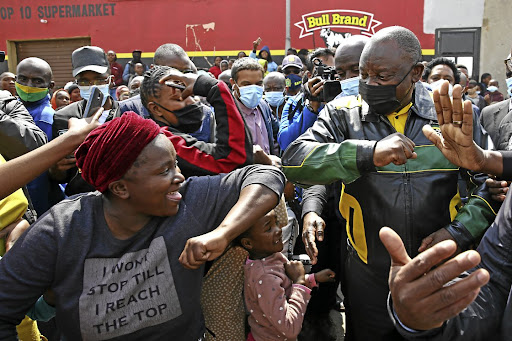 SA has a jobs crisis but the ANC has “big plans” to address unemployment, said party president Cyril Ramaphosa on Sunday.

Ramaphosa was on the campaign trail in Ekurhuleni, where he commended efforts by the ruling party to deliver basic services such as housing.

“All I can read and sense here is quite a lot of satisfaction with what our metro has been doing here. There has been a lot of development in this area. When I last came here in 2016, we didn’t have all these houses,” said Ramaphosa.

“Wherever I have gone, people are complaining about jobs and we said that we have got big plans to make sure that we create an environment where jobs will be created in our economy,” said Ramaphosa, who said he was confident the ANC would emerge victorious after the local government elections later this year.

Ramaphosa reiterated this sentiment during a preview of the ruling party’s elections manifesto on Sunday.

“Our local government structures, in the main, have sought to deliver to our people, but, in the course of doing so, have made some errors, and our people are well accepting of this,” said Ramaphosa.

He said the selection process of candidates was rigorous and focused on individuals who represent the aspirations of the communities they live in. He added that the inclusion of young people as proportional representation candidates and ward councillors would give service delivery at the community level a much-needed boost.

The young leaders would work jointly with older councillors, said the president.

“These young candidates will bring greater energy and innovation to local government, as the third tier of the structure of our broader government. They will also bring a far deeper understanding of the needs of young people.

“Our young candidates will be joining hands with an experienced core of older councillors, enabling us to build on the gains we have made. They will learn from our mistakes, for we have made mistakes,” said Ramaphosa.

Political parties and independent candidates have hit the ground running with campaigns ahead of the local government elections on November 1.

Which party will you vote for in the local government elections?

A quarter of the ANC candidates are under the age of 30 as the party looks to impress more than 433,000 new voters
Politics
3 weeks ago