United Phosphorous says it will eliminate the spilt product from the environment, despite the arson being entirely beyond its control 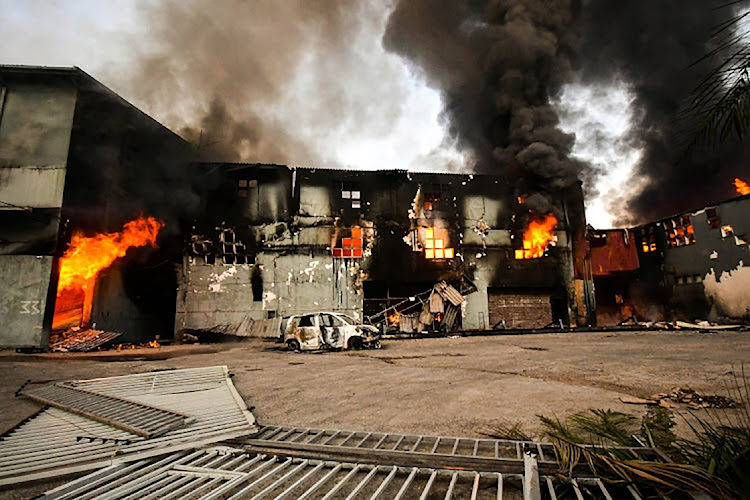 Businesses and factories such as this one in Sea Cow Lake, Durban, were destroyed in the unrest in July. Picture: REUTERS/DARREN STEWART

Durban chemical facility United Phosphorous (UPL), where a huge fire broke out during the unrest in July, says it is unaware of any criminal charge that has been brought against it.

Police said an Umhlanga game reserve employee had opened a case at the Verulam police station in terms of the National Environmental Management Act, after alleging that fish had died and water in the lagoon had turned green after a raging fire at the facility. The fire at the warehouse sent clouds of noxious smoke over nearby communities and caused a chemical spill that poisoned a river and wetland.

Heinz de Boer, DA spokesperson on economic development, tourism and environmental affairs in KwaZulu-Natal, said on Thursday: “The cat and mouse game that UPL has engaged in – with both provincial authorities and the public – should come to an end, following the laying of criminal charges.”

UPL told TimesLIVE that while it had noted De Boer’s statement that charges have been laid against it for “environmental pollution”, it said it “has not seen any charges, nor does it understand the basis for such charges, if there are any, or who has laid them”.

The company denied providing “unsatisfactory responses”, “unsatisfactory reports” or “having failed to supply necessary documents and information to the authorities. “Since the destruction of its leased warehouse, UPL has complied fully with its reporting obligations, has been working closely with the relevant national, provincial and local government authorities.” It disclosed its inventories, as required, a considerable time ago, and its team of experts has employed an array of measures to contain and progressively clean up the contamination.

“Contrary to what has been said, UPL will continue to do everything it can to eliminate the spilt product from the environment, and no expense or expertise is being spared, despite the fact that the event was the result of civil unrest entirely beyond its control.”

The July unrest cost the eThekwini metro a loss of 50,000 visitors, R110m in direct spending, R280m in tourism GDP and 600 jobs
National
2 weeks ago

CHRIS HART: Townships and small business must get more than just financial ...

CHRIS HART: Townships and small business must get more than just financial ...