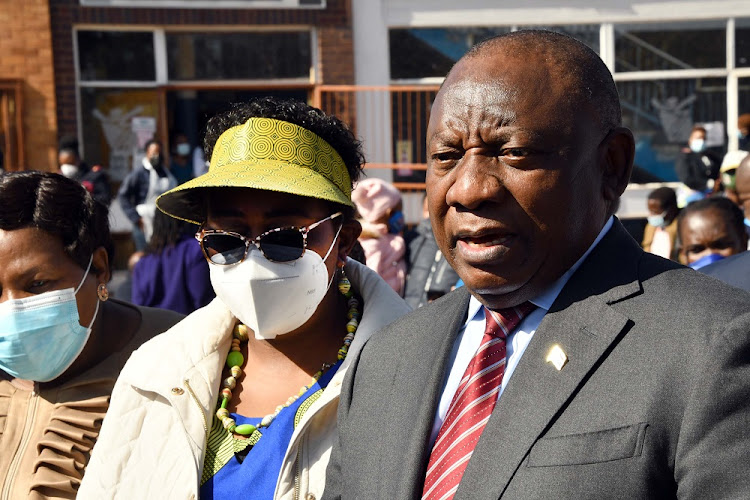 President Cyril Ramaphosa says he is considering a “reconfiguration” of his cabinet.

Ramaphosa, who addressed journalists after touring a Covid-19 vaccination site in Tembisa on the East Rand, said the reconfiguring of a cabinet was an “ongoing consideration by any president”.

“You look at how you deploy the people who you are working with and how you place those people to execute various tasks‚ so it is an ongoing process of evaluation and all that. So it's not something that we would say [is] a process that is outlandish; we continue to look at it‚” he said.

The president has been under pressure to replace some members of the cabinet to restore the nation’s trust. The calls come in the light of the recent unrest that gripped parts of KwaZulu-Natal and Gauteng, and seemingly contradictory statements made by some ministers — including police minister Bheki Cele‚ defence and military veterans minister Nosiviwe Mapisa-Nqakula and state security minister Ayanda Dlodlo.

At the weekend‚ the Sunday Times reported that a major shake-up of the country's security cluster — including the axing of ministers — was on the cards after the government’s poor handling of the recent riots that cost 330 lives and caused R50bn in damage to property and infrastructure.

A number of directors-general and ministers on Wednesday confirmed to Business Day that the president had spoke to them about reconfiguring government departments.

On suspended health minister Dr Zweli Mkhize‚ who faces serious allegations of wrongdoing involving the alleged looting of state funds by his close associate in a R150m contract awarded to Digital Vibes‚ Ramaphosa said he was yet to make a pronouncement.

“I have received the SIU report and there is some finalisation of certain aspects, which we're going to get. I am looking at it so allow me the time and space to look at that.”

Rumours of a cabinet reshuffle have been given fresh impetus by the recent unrest. But that’s no easy job for Ramaphosa, given the calibre of ...
Features
1 month ago

YACOOB ABBA OMAR: A new cabinet and the hyphen between nation and state

SA is a work in progress, and we need to work at becoming true South Africans
Opinion
1 month ago

Cyril Ramaphosa’s greatest asset has been his ability to slow time down, so that it appears the instability is less intense — it is not
Opinion
1 month ago
Next Article