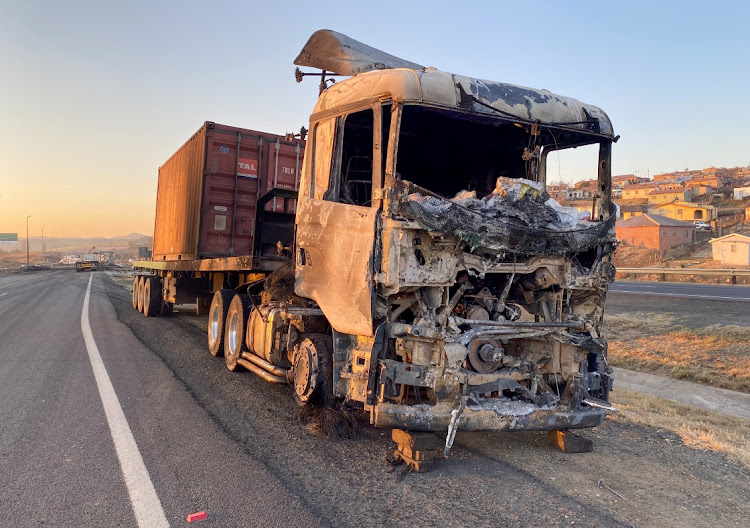 The transport business in SA is “a business that only brings tears and more tears”, says Road Freight Association CEO Gavin Kelly after riots in Gauteng and KwaZulu-Natal where trucks were again a favourite target for rioters.

It took 24 hours for authorities to clear the N3 near Mooi River in KwaZulu-Natal, where rioters protesting against Jacob Zuma’s incarceration, torched 23 trucks on Friday night.

Kelly said it was reported that 30 trucks had been set alight in the province since the violence started.

“Why is trucking being targeted? Why should those who have nothing to do with either aggrieved party and who are just trying to ply their business [whether owners or employees], be subjected to such violence and common thuggery,” he asked.

“We have small business owners who most probably have lost everything — their business, their vehicles, as well as the loads they were carrying. Their employees could very well face the ogre of unemployment,” said Kelly.

He said the effects on the freight industry caused by the disruption are far-reaching.

“There are companies that may well now be closed. Forever. There are cargo owners [people who pay transporters to move their goods] who are now looking at alternative routes — through Namibia, Angola, Mozambique and even further north,” said Kelly.

Kelly said that due to the degradation of the transport industry and the loss of freight transit capacity in SA the country has lost its “Gateway to Africa” status.

“Some transporters are looking at changing routes, and this affects many small economies along the route: from fuel to refreshments, support and security, while others are looking at getting out of a business that only brings tears and more tears,” he said.

“Thank goodness we have not had any serious injuries or deaths to our employees this time round. But when will it stop?” said Kelly.

He said aside from the loss of vehicles, the industry is losing cargo, equipment and road infrastructure, the costs of which he estimated would easily run into millions of rand.

The cost to employees in losing their jobs as companies close operations, the loss of income for their families and the support network they provide (food, housing, clothing, education, health) and the impact this violence has on the communities they originate and live in, is almost impossible to calculate, said Kelly.

Violent protests kicked off around Gauteng on July 11 2021 resulting in torched vehicles, burnt buildings and clashes with police.

He said the image of SA as a safe, secure, efficient, and desirable destination for trade, manufacturing, investment, and development is gone.

“We will never recover from what we have done to ourselves here,” he said.

“The attacks on the freight industry are uncalled for. They are malicious and without concern for what the far-reaching effects on the livelihoods of all South Africans will be,” he said.

“These trucks are carrying the food, medicines, oxygen, essentials, as well as all the luxury goods that everyone either desperately needs for survival or are part of the development of a better life for all. That dream is gone — unless we stop this now,” said Kelly.

He called on President Cyril Ramaphosa to ensure that the violence is stopped and that those responsible are held to account, “that the rule of law is shown to be firmly in place and that the safety and security of SA and its people is ensured”.

“We would urge that it is time to bring tighter controls in the areas where the protests are raging, that there needs to be more dedicated use of the SA Police Service in ensuring these areas are brought under control and managed.

“The opportunistic crime needs to be stopped — but the blatant incitement of violence and the destruction of the economy and well-being of all citizens needs to stop,” he said.

He called on the government to put an effective plan in place to prevent the trucking industry coming under further attack and to prevent further damage to businesses already suffering under Covid-19 regulations.