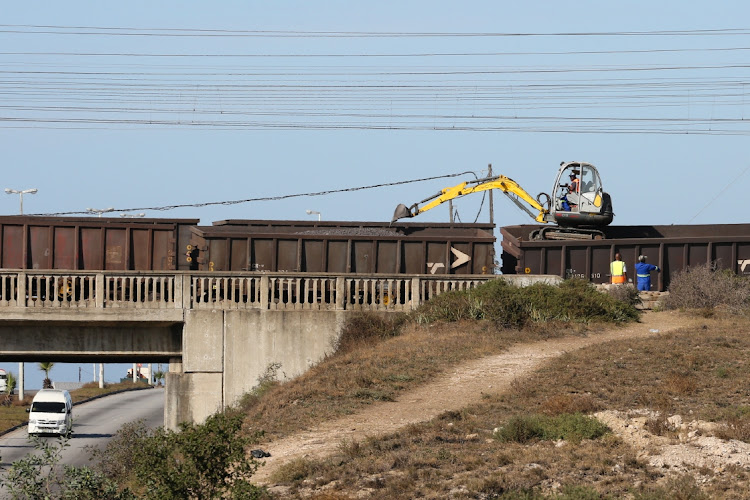 Transnet Freight Rail (TFR) confirmed to Business Day that it had experienced an incident in the early hours of Saturday when a coal train pulling 200 wagons on its way to Richards Bay Coal Terminal derailed, affecting 31 wagons.

Videos and photos seen by Business Day show many derailed wagons overturned down an embankment with heaps of coal on the ground.

TFR spokesperson Jane Moshoeshoe said there were no fatalities or injuries to the train crew or external parties. Investigations into the cause of the derailment were continuing.

One of the affected lines reopened on Sunday and is running trains. Work is still under way to clear the other line before repair work can commence, she said.

The line, which transports coal from SA’s coalfields down to the Richards Bay Coal Terminal, has suffered its share of disruptions. In April a derailment on the line affected product movement for nine days.

Coal exporters such as JSE-listed Exxaro Resources have grown increasingly frustrated with the logistics issues which cause them to lose billions of rand through being unable to take full advantage of booming export coal prices.

On Friday the benchmark coal export price surpassed $130 a tonne for the first time in a decade. Coal exports are also a major foreign exchange earner for SA.

Saturday’s incident comes amid assurances from TFR that it is tackling operational and security issues which have caused chronic and often crippling disruptions to the rail network this year.

While operational capacity is one part of the  problem, theft and vandalism is another. Transnet CEO Portia Derby last month said cable theft was disrupting 30% of TFR’s rail network every week, affecting exports such as bulk products and metals. Domestic markets are also suffering the effects of the troubled rail system as customers are forced to truck in product that would otherwise have been delivered by rail.

Last week, Exxaro said it expected at least 2-million tonnes of its sales to be affected by the logistics issues with the rail line. This would translate to at least R2bn in lost revenue, it said.

Business Day reported on Monday that TFR is preparing to launch a multibillion-rand effort to secure its infrastructure against rampant theft and vandalism.

According to CEO Sizakele Mzimela, TFR will in two weeks announce its plans to curb theft of its infrastructure, working closely with the private sector to roll out innovative technologies and strategies. TFR’s annual maintenance shutdown, scheduled for July 13-19, will commence as planned, Moshoeshoe said.

Preparation for allowing operators onto network should be completed in about 15 months, says CEO Sizakele Mzimela
National
1 month ago

Slow-coach Transnet is not helping SA

Transnet Freight Rail’s faltering steps a crisis in the making

Continued problems on the railways has been a crippling problem for exporters of coal and other commodities at a time when global commodity prices ...
Companies
1 month ago
Next Article