Cyril Ramaphosa, in his capacity as ANC president, is giving evidence to the state-capture commission 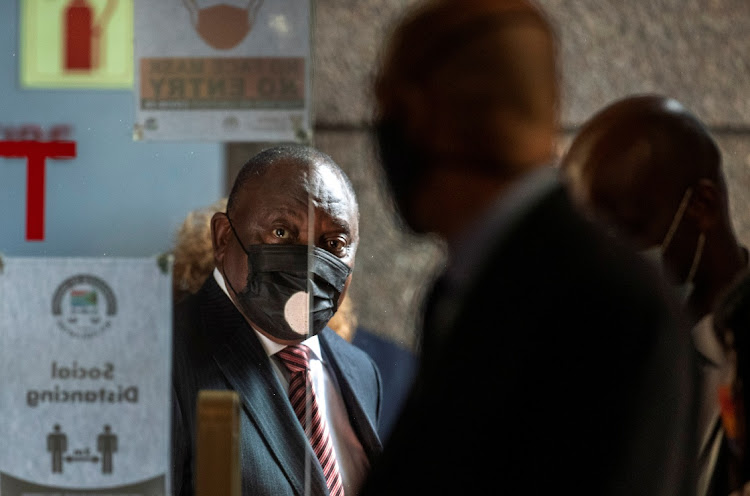 President Cyril Ramaphosa arrives to testify before the Zondo commission of inquiry into state capture in Johannesburg on April 28 2021. Picture: REUTERS/THEMBA HADEBE

Factionalism and the pursuit of material personal interests provided a fertile ground for corruption and state capture to thrive in the ruling party, Cyril Ramaphosa said in his opening statement at the Zondo commission of inquiry into state capture on Wednesday.

Ramaphosa appeared at the inquiry accompanied by his wife, Tshepo Motsepe, and members of the ANC top six, including national chair Gwede Mantashe and deputy secretary-general Jessie Duarte, but secretary-general Ace Magashule was not present.

He stressed in his opening statement that he was not at the commission to “make excuses or to defend the indefensible” for state capture, which has taken a great toll on SA society and economy.

“We all acknowledge that the organisation could and should have done more to prevent the abuse of power and the misappropriation of resources that defined the era of state capture.”

He acknowledged the shortcomings of the ANC and that it had not always lived up to the values and principles that had defined it for more than 100 years. However, the party is determined to ensure that the era of state capture is relegated to history and that the excesses that took place will never happen again.

Ramaphosa noted that “the ability of any organisation — but especially a political formation — to act on allegations of malfeasance relies not only on its formal rules and procedures, but also on the balance of power within its structures. The alignment of views within such an organisation is further influenced by access to the offices of state, where the ability to appoint and dismiss — and even to dispense patronage — is concentrated among a few individuals. For the ANC, this was compounded by its own subjective challenges.

“For the ANC, this was compounded by its own subjective challenges,” including the erosion of its organisational integrity, the advancement of the material interests of certain members and associated private companies and individuals, weak and pliable branches, vote-buying and gate-keeping, factionalism and even open conflict.

On cadre deployment, Ramaphosa said the ANC had emphasised professionalism and competence in the transformation of the public service

“This provided fertile ground for state capture and corruption,” Ramaphosa said, though he emphasised that while there were leaders and individuals in the ANC who were corrupt, the party was not. That corruption in the party contributed “to practices of patronage, factionalism and the manipulation of organisational processes within the ANC is a matter of record”.

Ramaphosa said it took some time for the term “state capture” to gain currency and for the phenomenon to be recognised as such. There were contestations within the ANC about the use of the term and the existence of the phenomenon.

One of the earliest claims made within ANC structures of the possibility that members of the Gupta family may have had an improper role in the functioning of the executive was a statement by transport minister Fikile Mbalula at a National Executive Committee (NEC) meeting in 2011, but the matter was not taken further by the party. Over time these claims intensified and the subject increasingly came under discussion in the NEC and other ANC structures.

“Corruption is, by its nature, a covert activity. Without direct evidence, without any investigative capability and mandate, and in the face of vehement denials, it is difficult for any structure to confront such activities.”

Ramaphosa said the ANC had, over several years, recognised the existence of corruption within the state, within its own ranks and in other parts of society. It had taken several resolutions on measures to prevent corruption and state capture from 2016 onwards.

Ramaphosa said the ANC’s 54th national conference in 2017 was a watershed moment in the ANC’s efforts to confront state capture and corruption within its ranks. The conference resolved that every ANC member accused of, or reported to be involved in, corrupt practices account to the party’s integrity commission immediately or face disciplinary processes. People who failed to give an acceptable explanation or to voluntarily step down, while they faced disciplinary, investigative or prosecutorial procedures would be suspended.

The NEC decided at its meeting in March that all members who have been charged with corruption or other serious crimes must step aside within 30 days, failing which they should be suspended.

Ramaphosa noted, however, that this process was not only determined by the existence of political will and organisational capacity, “but also by the continued existence of vested interests and resistance from those who have much to lose from the corrective measures mandated by the ANC’s 54th national conference”.

This conference resolved to support the establishment of a commission into state capture.

Ramaphosa said ANC members who engaged in corruption must face the full legal consequences of their actions and could not rely on the ANC for support or protection, nor may they appeal to the principle of collective responsibility.

On cadre deployment, Ramaphosa said the ANC had emphasised professionalism and competence in the transformation of the public service. Cadre deployment is essential for democracy so the government fulfilled the mandate given to it by voters. The ANC also supported the principle that all public servants undertake their duties in a fair, balanced and non-partisan manner.

“It is the ANC’s view that the practice of cadre deployment should not be inconsistent with the principles of fairness, transparency and merit in the appointment of individuals to public entities,” Ramaphosa said. “Cadre deployment cannot be faulted in principle; it is a common feature of democratic practice around the world. But we would concede that there are weaknesses in its practical implementation that make the case for greater clarity, both within political parties and the state.”

On the funding of political parties, Ramaphosa noted that until the adoption of the Political Party Funding Act, which took effect on April 1 2021, there were few, if any, specific restrictions on donations to political parties and no requirements on the reporting of donations, either publicly or to any particular authority. He said the ANC would not knowingly accept monies that are the product of a criminal act, are offered in exchange for favours, or are from a source known to engage in illegal or unethical activities.

The president has, though, conceded there are ‘instances’ where it has gone wrong
National
3 months ago

This week will be hugely significant for the ANC — it will become clear if Ramaphosa can lead the party in making a clean break with the past and ...
Opinion
3 months ago