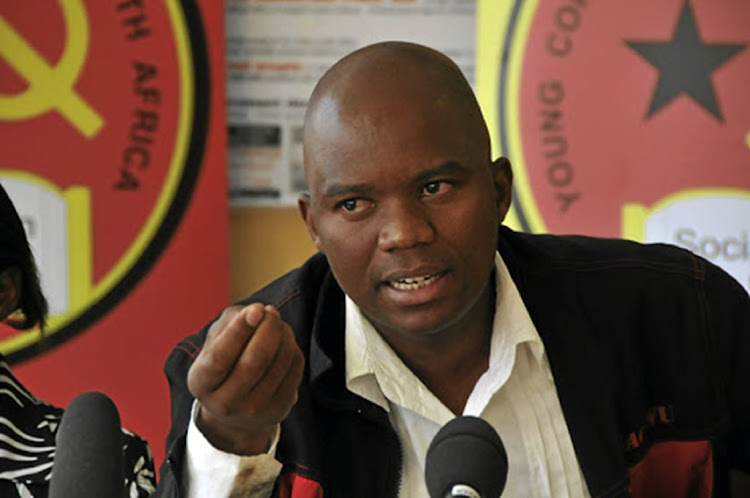 SACP national spokesperson Alex Mashilo said the step-aside resolution should be welcomed to arrest the cancer of corruption that threatens the demise of the ANC. Picture: SUPPLIED

The SA Communist Party (SACP) has thrown its weight behind the ANC national executive committee (NEC) resolution that leaders who are criminally charged should step aside.

“One of the things that immediately destroys former liberation movements when they ascend to power is corruption,” SACP spokesperson Alex Mashilo said on Tuesday at an event to commemorate the death of freedom fighter Solomon Mahlangu in Pretoria.

The SACP is a key ally of the ANC and is part of its tripartite alliance. Its support is expected to boost President Cyril Ramaphosa’s political fortunes as he moves to reform the party and the government.

The other member of the tripartite alliance, Cosatu, has already lent its support to the resolution that could cause a number of Ramaphosa’s critics being asked to step aside after being charged in connection with numerous serious offences, including corruption and fraud.

Most notably among these is party secretary-general Ace Magashule, who stands accused on charges related to the corrupt awarding of a R255m Free State asbestos roofing tender. He is a former premier and a longtime ANC chair of the province.

Mashilo said the step-side resolution must be implemented “wholeheartedly”. His party will assist its members to whom the resolution applies to follow it “to the letter”.

The resolution is among efforts by the governing party to save face amid allegations of widespread corruption faced by leaders within the ANC and in public office.

MMashilo said the resolution should be welcomed to arrest the cancer of corruption that threatens the ANC’s existence in the same way it destroyed liberation movements elsewhere on the continent.

“Those comrades who are affected by allegations of corruption before the courts of law must respect the decision of the NEC of the ANC to step aside within 30 days.

“It is important for that resolution to be implemented wholeheartedly. In the Communist Party, those who do not do so, we will help them to step aside.

MMashilo called on the ANC-led alliance to intensify its fight for “complete freedom” and a socialist state.

He said the attainment of independence in 1994 was only a “democratic breakthrough”, but the “true freedom” for which Mahlangu and others had lost their lives is yet to be attained.

MMashilo said more than 11-million jobless people is not the freedom for which Mahlangu fought.

“This is our message to the ANC: if you are divided, you will not lead society to the freedom Solomon Mahlangu stood for. Please be united. We need unity of the ANC to prevail in the forthcoming elections and in the 2024 national elections.”

Every step taken by the ANC’s NEC this week is setting a precedent and has to be applied across the board, even into the future
Opinion
2 weeks ago

ANC members charged with wrongdoing have 30 days to step aside or face suspension, Ramaphosa says

Some NEC members believe the matter should be voted on, seeing this as the only deadlock-breaking mechanism available
National
2 weeks ago
Next Article