Gauteng hospital forced to give oxygen in parking lots 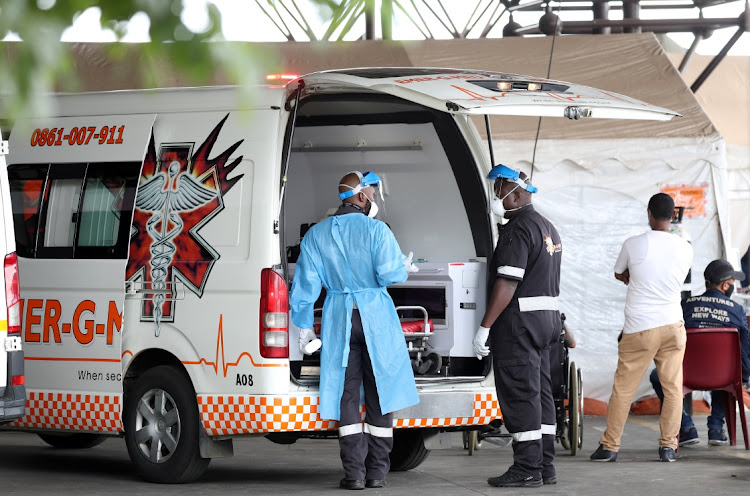 Health workers chat near an ambulance at the parking lot of the Steve Biko Academic Hospital, amid a nationwide coronavirus disease lockdown, in Pretoria on January 11, 2021. Picture: REUTERS/SIPHIWE SIBEKO

As daily cases of Covid-19 in SA reach 20,000, surpassing levels seen during the first wave of the pandemic, Steve Biko hospital in Pretoria is so full that staff are giving some patients oxygen in beds wheeled out into the parking lot.

Hospitals in coronavirus hotspots are full to capacity and face a shortage of beds, dwindling supplies of oxygen and a lack of intensive-care units.

A Reuters cameraman visited the government-run Steve Biko Academic Hospital on Monday and saw a patient receiving oxygen on the tarmac outside the entrance to the emergency department. Nearby, hospital staff were spraying down beds with sanitiser to prepare for more patients. The hospital has erected large tents where some patients receive emergency treatment before being moved to designated wards.

As of Sunday night, SA had recorded more than 1.2-million infections, the most in Africa, and over 33,000 deaths. Infections surpassed 21,000 a day last week, a new peak, driven by a virus variant called 501Y.V2, which is believed to be more contagious.

Steve Biko hospital’s CEO told the SABC that treating patients outside was unavoidable because of a sudden surge in patients. “Covid-19 patients, even one that looks stable as he steps in the door, the condition can change any time ... Our capacity in terms of inside, it was overflowing,” Mathabo Mathebula said.

The Gauteng health department on Sunday responded to reports on social media that Steve Biko hospital was overwhelmed. “The increased number of patients are sicker and require critical care ... putting serious pressure on the facility,” it said, adding that it was “putting up two additional tents to accommodate this increase”.

National health department deputy director-general Anban Pillay told Reuters all provinces had expanded their bed capacity in preparation for rising Covid-19 infections. “The problem is congestion in certain facilities like Steve Biko. Gauteng is bringing on more beds” at the Nasrec field hospital in Johannesburg and Jubilee hospital north of Pretoria, he said.

Nurses interviewed by Reuters said wards at other hospitals in Gauteng, including in Johannesburg, were also full.

“It’s a very painful situation because for you to get a bed, someone must die,” Rich Sicina, a nurse at Thelle Mogoerane Regional Hospital, said, adding that his hospital was also treating Covid-19 patients in tents. “It’s a matter of choosing who to save and who not to save.”

WATCH: President updates the nation on Covid-19 as cases spike

WATCH: President updates the nation on Covid-19 as cases spike