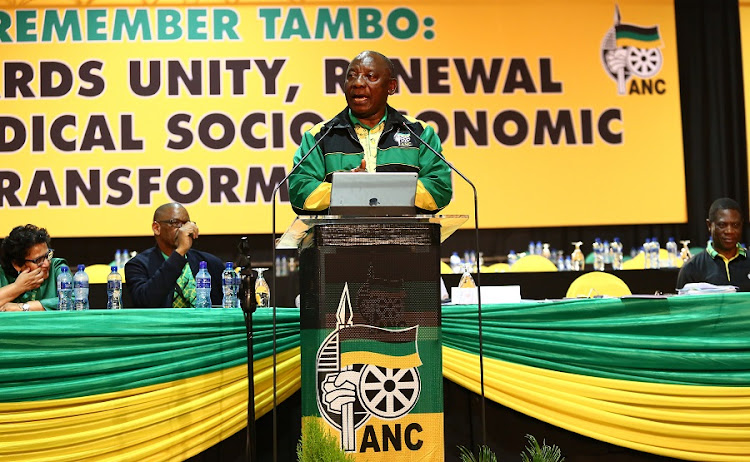 Cyril Ramaphosa addresses the ANC for the first time as its leader in December 2017. Picture: MASI LOSI

The ANC’s integrity commission (IC) has criticised President Cyril Ramaphosa for seeming to give it the runaround for 18 months instead of answering questions about the controversial CR17 campaign funds.

In a report dated December 21‚ chairperson George Mashamba expressed the commission’s disappointment with Ramaphosa’s reluctance to discuss the CR17 funds until the courts have finalised the matter.

CR17 refers to Ramaphosa’s campaign for the presidency of the governing party in December 2017, which he narrowly won against Nkosazana Dlamini-Zuma.

The commission was also not impressed with Ramaphosa trying to have his legal adviser present at their meeting‚ which under the commission’s terms of reference is not allowed.

Mashamba wrote that the commission first requested to meet with Ramaphosa in 2018 when the issue of Bosasa and the CR17 campaign funds initially arose.

“The IC identified this as a very important and sensitive issue for the organisation‚ and anticipated that this was going to do damage to the reputation and good standing of the ANC‚” he said.

“The use of such allegedly huge sums of money for individual leadership campaigns was a departure from the internal democratic procedures of the organisation and was having a negative impact on the organisation.

“It was therefore a great disappointment to the IC when the president explained to the chairperson of the commission that since this was a legal matter‚ he did not feel it was right to discuss the CR17 campaign funds until the legal matter was finalised.”

Mashamba revealed that the commission pursued the matter and made several requests‚ verbally and in writing‚ to meet Ramaphosa over an 18-month period.

“It did not sit well with the IC that the president especially‚ but also the [top six] officials‚ continually referred publicly to the importance of the IC and the work being done‚ but in reality there was little to no interaction.”

According to the report‚ Ramaphosa finally engaged with the commission via video conference on November 19‚ at the IC's request‚ and with the main purpose of soliciting and exchanging views on funding for campaigns for individuals seeking to hold office in the ANC.

It is obvious to the commission that [the use of money in buying votes] is becoming increasingly divisive and is being used as an instrument to further factional divisions.

The meeting wanted to focus on the principle of the use of money in individual leadership campaigns within the organisation in the future‚ Mashamba said.

“However‚ with regard to the buying of votes subsequent to the 2017 conference‚ the IC strongly recommends that if any comrade has irrefutable evidence of this‚ it must be brought to the notice of the disciplinary committee as a matter of urgency‚” he said.

The issue of the use of money in buying votes‚ especially in relation to leadership positions‚ kept arising in the media and public arena. “It is obvious to the commission that this issue is becoming increasingly divisive and is being used as an instrument to further factional divisions at all levels of the organisation. This is damaging the reputation of the organisation‚” he wrote.

According to Mashamba‚ Ramaphosa accepted the commission's approach and offered to send a 69-page presentation he had prepared. This he has not done.

The report quotes Ramaphosa as having told the commission that the ANC needs to accept that campaigning is part of the modern way in which political parties operate‚ but that it has to be regulated.

According to the report he explained that contestation became an issue in the ANC after the dawn of democracy. Before its unbanning‚ people were asked to make themselves available for election but after 1994‚ the introduction of money was linked to access to resources and to government positions‚ among other things.

Ramaphosa said many conferences have taken resolutions on the issue‚ yet the practice has become one in which the use of money underpins leadership contests.

An end to factionalism would require a new approach to leadership contestation‚ he suggested‚ adding that without clear guidelines‚ contestation would continue to occur in the shadows‚ encouraging factionalism.

Ramaphosa also called on the ANC to clearly distinguish between permissible forms of campaigning and those that are not‚ with the intention to ensure legitimacy‚ transparency and accountability.

According to the report‚ the commission maintained a view that raising and using money for individual leadership campaigns at all levels of the organisation should be strictly prohibited.

The matter of the CR17 campaign funds is before the Constitutional Court after public protector Busisiwe Mkhwebane investigated the movement of money raised for Ramaphosa's campaign between different accounts. She found there was merit in suspicions about money laundering.

The high court set aside her report in its entirety‚ and sternly rebuked her for some of her findings. Mkhwebane‚ supported by the EFF‚ then applied to the Constitutional Court to overturn the high court order.

Disclose your own donors too, experts urge Busisiwe Mkhwebane