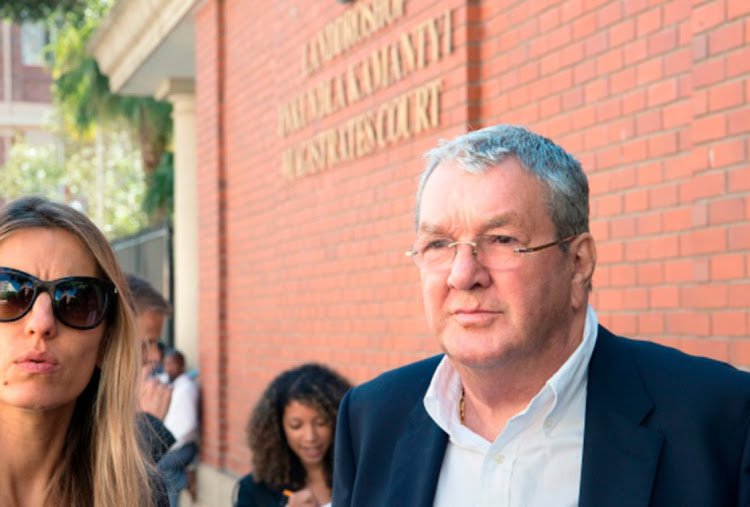 Guus Van Kouwenhoven, a convicted Dutch arms dealer, talks to his legal team as he stands outside the Magistrate's Court, for his extradition hearing on February 27 2018, in Cape Town. Picture: AFP/GETTY IMAGES/ RODGER BOSCH

SA has cancelled the visitors visa of Guus Kouwenhoven, a Dutch businessperson and convicted arms dealer, declaring him “an undesirable person”.

Kouwenhoven, who is residing in Cape Town, is wanted in the Netherlands after he was handed a 19-year prison sentence by a Dutch court in 2017 for smuggling weapons for former Liberian strongman Charles Taylor during that country’s civil war. The conviction was the result of a retrial following an earlier acquittal in 2008.

Kouwenhoven has 10 working days to appeal, the government said in a letter informing him of the decision, sent to Bloomberg.

Kouwenhoven’s case drew attention in the Netherlands because he was among the first to be prosecuted for involvement with rights abuses on another continent. He travelled to Cape Town in 2016 and has since refused to return.

Charles Taylor, who played a key role in the Liberian civil war but was convicted for crimes against humanity committed in neighbouring Sierra Leone, has been serving a 50-year sentence in a UK prison since 2012.

Dutch war criminal Guus Kouwenhoven not being extradited yet, after breaking his leg

After the International Criminal Court found him guilty of war crimes and arms dealing in his absence, and he fled to SA in December 2016
National
3 years ago