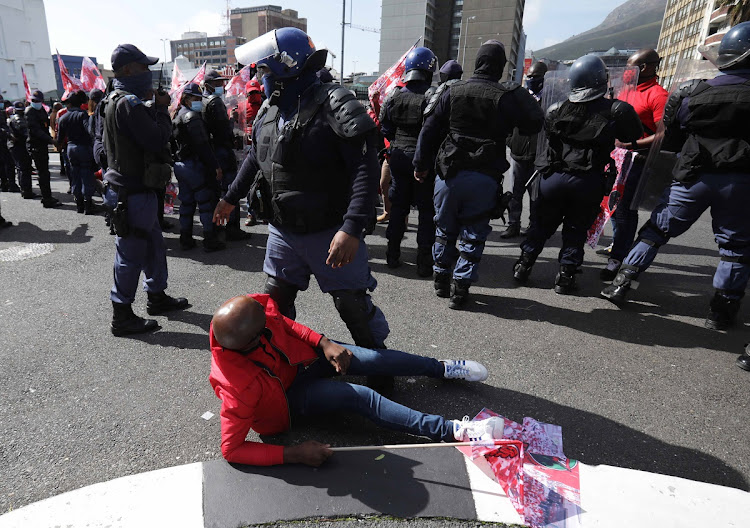 Police used stun grenades and a water cannon to disperse members of the National Education Health and Allied Workers’ Union (Nehawu) who had marched to parliament to deliver a list of demands related to personal protective equipment (PPE) and better wages.

Nehawu, the country’s third-largest public sector union, which represents 108,000 health-care workers, gave the government an ultimatum: respond favourably to our demands or face an indefinite strike by health-care workers, as it embarked on its national day of action on Thursday.

It delivered memorandums to the Union Buildings, the National Assembly and the premiers’ offices across the country, to protest against a lack of PPE and demand better wages and incentives. Nehawu called on the government to be more accountable and transparent in its handling of the fight against Covid-19. The virus has infected more than 27,360 front-line workers, and more than 240 have died from it.

At the Union Buildings, Nehawu general secretary Zola Saphetha handed over their demands to acting director-general in the presidency Lusanda Mxenge.

“There is no justification whatsoever for government’s failure to comply with the occupational health and safety legislation and regulations that seek to protect workers, especially those on the front-line of combating the pandemic,” said Saphetha.

Nehawu’s demands, among others, include that all health-care institutions comply with the Occupational Health and Safety Act, that occupational health and safety committees be established in all workplaces, and that infected workers must only return to work after having completed 10 days of mandatory self-isolation.

Nehawu, which demanded the procurement and provision of adequate protective equipment, also called for implementation of a risk or danger allowance for front-line workers. Health minister Zweli Mkhize has said this was being considered.

Nehawu also demanded the implementation of the last leg of a multiyear wage agreement signed in the public sector co-ordinating bargaining council in 2018. In February, the government announced its decision to slash the public sector wage bill by more than R160bn over the next three years, a decision described by unions as a declaration of war.

Numsa spokesperson Khaya Xaba hailed the national day of action a success, noting however that two union members were arrested in Cape Town.

This after the police used a water cannon and stun grenades to disperse Nehawu members marching to parliament where they delivered their demands to deputy speaker of parliament Lechesa Tsenoli.

“We condemn the police action, it was not necessary. But other than that, the day went well, and should government not respond favourably, we will embark on an indefinite strike on September 10. This will include all the sectors Nehawu organises in,” said Xaba.

With protective equipment in short supply, and the pandemic yet to peak, the union says health workers are reduced to wearing bin bags
National
10 months ago

In a webinar hosted by the science and technology department, Mkhize said bed capacity to manage Covid-19 infections was an ongoing battle
National
10 months ago

More than 1,000 health-care workers have been infected with the coronavirus in SA
National
1 year ago

Nehawu’s application to compel the national health department to provide protective equipment for healthcare workers amid the virus pandemic was ...
National
1 year ago

Unions and state to meet for conciliation talks over wage hikes