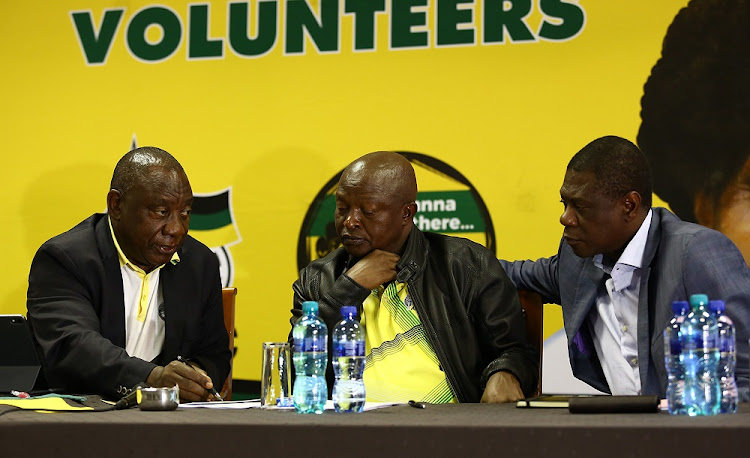 The ANC is set to go into a critical meeting this weekend in which it will have to determine how it deals with members who are accused of  corruption, less than a week after its president, Cyril Ramaphosa, drew a line in the sand to isolate corrupt officials.

The corruption is now so deep in the party that Ramaphosa took the unprecedented step of writing a letter to the ANC’s more than a million members, promising them that the party will take steps to deal with it.

The move indicates how severely stung Ramaphosa has been by the latest corruption revelations, which have exposed high-profile ANC members, including people close to him.

The letter, endorsed by the national working committee (NWC) on Monday, will now be presented at the meeting of the ANC’s national executive committee (NEC) this weekend.

In the letter, Ramaphosa spelt out in no uncertain terms that the ANC and its leaders stood accused of corruption.

“The ANC may not stand alone in the dock, but it does stand as Accused No 1.”

Before the letter was sent out this week, the party was in damage-control mode as allegations of corruption related to Covid-19 relief funds surfaced. Public anger has been rising as a result of it, and it has the ability to damage the ANC at the polls in 2021.

It was against this backdrop that the party’s national officials were tasked in the previous meeting of the NEC in July to immediately prepare an audited list of cases and submit this list within one month to the NWC and the NEC, with recommendations for action.

This list will be presented at this weekend’s meeting.

The NEC meeting is set to be heated, with calls expected to be made for MP Bongani Bongo, who is a portfolio committee chair in parliament, and former eThekwini mayor Zandile Gumede, now a KwaZulu-Natal MPL, to step down from their positions as they face corruption charges.

Andile Lungisa, who is a councillor in the Nelson Mandela Bay municipality, may also be in the firing line, as he has been found guilty of assault.

Gumede’s appointment to the legislature as an MPL last week raised public ire, as it followed declarations by the NEC after its last meeting that it was committed to draw a “clear line between our organisation and those who steal from the people”.

A senior party member who declined to be named told Business Day the key question the meeting will have to answer is how the ANC deals with tainted party members.

The member said the party had to determine how the presence of accused people affected the image of the ANC, as taking action against these members was within the party’s control.

The ANC’s resolution, which demands that every member accused of corruption account to the integrity commission or face disciplinary action, was expected to be a crucial part of this debate. The resolution also demanded that members who fail to give an acceptable explanation should be suspended immediately or must voluntarily step down while they face disciplinary, investigative or prosecutorial procedures.

According to a letter seen by Business Day, the integrity commission has written to ANC secretary-general Ace Magashule asking him to appear before it to “discuss and clarify”  comments he made during an interview where he said he would not step aside due to allegations of corruption.

ANC spokesperson Pule Mabe said Magashule had not received the letter, but had seen it making the rounds on social media.

“If there are issues to be made or anyone seeking an audience with the SG [secretary-general], they have every right and the SG always makes himself available … as long as it is raised within normal prescripts,”  he said.

Mabe said the NEC’s three-day meeting was not called to discuss corruption.

Issues on the table would include the ANC’s rules on local government candidates and elections, a report on electoral systems, and a Constitutional Court judgment that ruled that independent candidates be allowed to stand in provincial and national elections.

The NEC would also process discussion documents for its national general council, its mid-term conference that has been postponed due to the Covid-19 pandemic.

The party will have to sharpen what it means when a person has to step aside because of allegations, as this was a “grey area”, another NEC member said.

There was still a “thin majority” of NEC members who wanted the right things to happen and corruption to be dealt with.

The source said the fence sitters in the NEC could no longer stay quiet and duck the issues.

Sars asks for more resources to strengthen its investigative capacity

Sars asks for more resources to strengthen its investigative capacity