EXCLUSIVE: The young woman who rose from a Harare suburb to the Formula One limelight

It was always going to be in a year as upside down as 2020 that a disparate group of events that included the killing of a black man in Minneapolis in May colliding with the hard work and lifelong ambition of a young woman from Harare on a Formula One podium in Austria in July, absent of any crowd, would provide one of the year’s most endearing moments.

But this is exactly what happened when Stephanie Travers, the 26-year-old Petronas trackside fluid engineer working with the Mercedes-AMG Petronas Formula One (F1) team, became the first black woman to stand on an F1 podium, an outstanding achievement in a sport dominated by European men.

The moment she stepped onto the podium, Travers became a powerful reminder of why it is important to eradicate gender bias, racism and inequality. Here is a woman who, through her talent, hard work and dedication, has risen to the pinnacle of motorsport, and all she required from society to seize it was a fair chance.

As with the outrage that followed the killing of George Floyd a few months before that brought the US’s long, suppressed history of racial injustice into sharp focus and highlighted the glaring reality that people of colour are still treated differently to everybody else, Travers’s incredible achievement posed a very uncomfortable question: why had it taken so long? 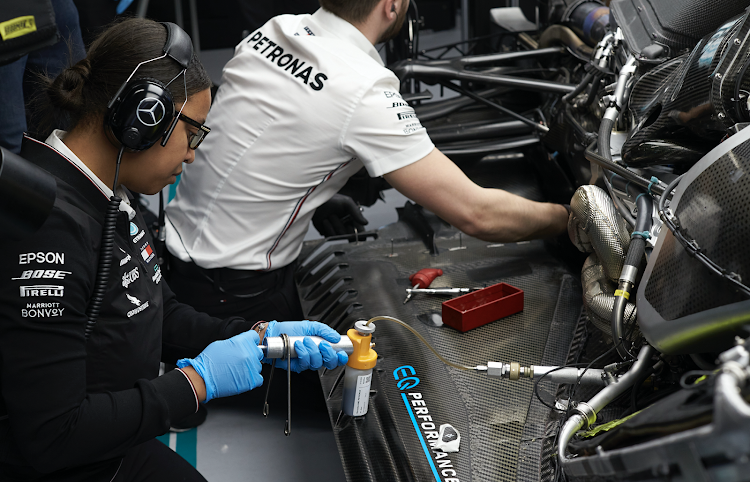 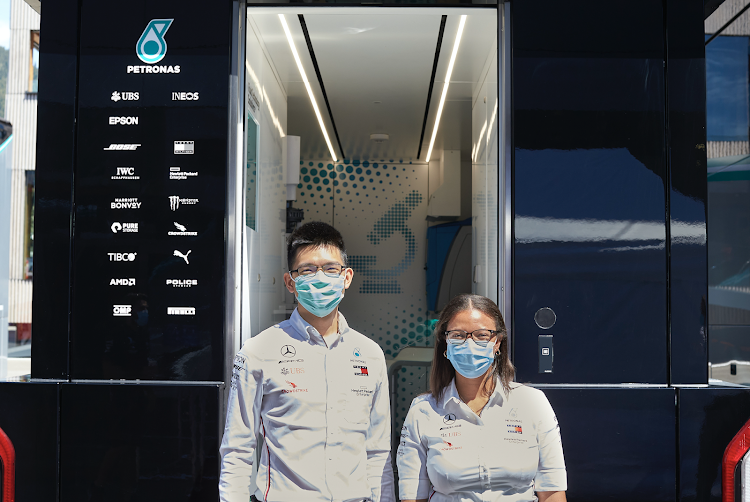 Petronas also staffs and equips the specialised mobile trackside laboratory that accompanies the team to all races. Extracting, testing and analysing the fuel, engine oil and transmission lubricant are the primary responsibility of Travers and her trackside laboratory colleague, En De Liow.

Over the course of a racing weekend, the duo will extract nine engine oil and six transmission lubricant samples per car, and 70-80 samples of fuel.

“I provide analysis of all the fluids we send trackside. In the case of analysing the fuel, we take a fingerprint from a fuel sample, and much like when you unlock your phone, the fingerprint has to match the standards of the ‘golden sample’ preapproved by the FIA [motorsport’s sanctioning body]. So much of the work I do at the beginning of a race week is to ensure the fuel complies with regulations,” says Travers.

There are serious consequences for getting the composition wrong — the team can be penalised and may forfeit qualifying places if it does not comply.

But the real expertise Travers provides is in the analysis of the engine oils and transmission fluids extracted from the cars after sessions. Over a racing weekend, Travers and Liow will analyse 132 oil tests, a process she describes as similar to what blood sampling does for humans — diagnose problems.

“What we are looking for is excessive wear. The presence of a combination of different metals in the oil sample can pinpoint exactly where there is a problem within the engine or gearbox. This allows our engineers to rectify it before it becomes a catastrophic failure,” says Travers.

Reliability has been a major factor in the almost unparalleled dominance the team has enjoyed in recent years, having won almost three out of every four races, and all six constructors’ championships held since the start of the 1.6l V6 hybrid turbo engine era in 2014.

Mercedes-AMG Petronas are well on their way to doing it again this season as they are leading the table. Five of Lewis Hamilton’s six world titles have been won with the current team over the course of the last six years.

Travers and Liow, using their learning from the race environment, also work with the Petronas Fluid Technology Solutions team and the Mercedes high-performance powertrains unit, which builds the engine parts for the Mercedes F1 cars, to adapt and improve the fluids.

In a nod to her employer, Travers says this technology and innovation filters its way down into the fuels and engine oils Petronas designs for standard road cars “like South Africans get at all Engen [a Petronas subsidiary] forecourts”.

But being able to develop and use this expertise in the uber-competitive F1 environment meant Travers had to succeed in a process perhaps even more competitive than the racing itself. To step into the glamorous and rarefied world of F1, she had to beat more than 7,000 applicants in Petronas’s global talent search before landing the job.

This culminated in an Amazing Race-style assignment across the centre of Kuala Lumpur to find the CEO of Petronas Lubricants International, before undertaking the final interview that led to Travers joining the team in February 2019.

She says the induction into the team couldn’t have been any easier, with team members through to the drivers, Hamilton and Valtteri Bottas, and team principal Toto Wolff embracing her “with open arms”.

But the spark that lit the flame for her passion for F1 came in her childhood.

“My dad [Bertram] had a real interest in Formula One and cars in general, and so did my mum [Maria]. It became a family activity on the weekend. We [including older brother Robert] would watch races and discuss them as a family. Even races such as [in] China, where you are waking up at 6am, we would all be there cuddled up watching the races together as a family and just enjoying following the team. So it’s something I always dreamt about from just watching the sport,” she says.

It was while Travers was attending Sharon School in Harare in 2004 that the family decided to emigrate to the UK. But far from cutting ties with the land of her birth, Travers has returned to Zimbabwe often, most recently in 2015 to see friends and family. She was in SA in 2019 for her nephew’s christening, as Robert lives in Johannesburg.

“Without their help and guidance, I wouldn’t be where I am now. They sacrificed a lot moving from Zimbabwe to the UK to provide us with a better life and to get us to where we are today,” Travers says.

In 2016, she graduated with a bachelor’s degree in chemical engineering with first-class honours from the University of Bradford and subsequently read for her master’s at Imperial College, London, which she obtained in 2017.

“My dad is one of my biggest inspirations. When we went to university, he was so interested in the courses that we studied that he was studying my degree course alongside me! So he was able to help me and encourage us to think differently, think outside the box. It was just great to have him there and have him so interested in our education and careers,” says Travers.

I wanted to post this because it’s such an important moment. This is Stephanie who is one of my teammates. She is one of our trackside fluid engineers. On Sunday, she became the first black woman to stand on the podium in Formula 1 history. This is an amazing achievement and I just wanted to acknowledge her for her hard work, positivity, and passion for her job. Like most of the jobs in our sport they are in high demand, and Stephanie was selected out of over 7000 applicants for her role. Steph said she wants to inspire young black children, and children of colour to believe that they can do it too, and I couldn’t agree more. Put your mind to it, and you can be anything you want to be. So whilst I really appreciate all of the congratulations, I wanted take the opportunity to lift her up, and share them with her. #manifest #hardwork #bethechange

Pursuing a degree in chemical engineering flowed from her enjoyment of maths and chemistry at school, but it was also congruent with her passion for motorsports and her dream to one day be involved in F1.

“I knew there were a few roles that chemical engineering could get me to in F1, like the one that I am in at the moment. So I went to university and did what I loved, as I knew that ultimately if I did not get into the motorsport environment, I would enjoy my job. That was the main thing, and that was something I was always told by my parents — it’s important to love what you do,” she says.

By the time Sunday, July 12 rolled around in Austria, Hamilton had done the business at the Red Bull Ring and qualified on pole, with Bottas starting in fourth behind Max Verstappen and Carlos Sainz.

Hamilton would lead from start to finish, with Bottas eventually hunting down and passing Verstappen in the final laps to take second place and give the team a resounding win in the constructors’ title.

her name is Stephanie Travers and she’s a trackside fluid engineer for Mercedes & Petronas. she’s also the first black woman that’s ever stood on the F1 podium. https://t.co/wehc5Yb2Yf

“I wasn’t expecting it at all; it was a surprise. It was a bit of a ‘are you sure it’s me?’ and they are like ‘yes, it’s you going up today’, and I was like ‘no, it can’t be me!’, but they were adamant. I didn’t even have time to inform my family and friends. But … my family are all F1 fans and they were watching anyway and were going crazy at the TV. It was such a surreal moment.”

Hamilton would later that day post appreciation for Travers on his Instagram account and highlight the historic moment of her becoming the first black woman to stand atop the podium.

“This is an amazing achievement and I just wanted to acknowledge her for her hard work, positivity and passion for her job,” wrote Hamilton.

“It was just fantastic for him to acknowledge the work that I do to power his car,” says Travers.

Travers says the reaction to her achievement has been incredible, but she wants to use her newfound fame to inspire black children and young girls to single-mindedly pursue their dreams.

“I decided to pursue this career path knowing it was a male-dominated field and I didn’t let that deter me from my dreams because ultimately I knew where I wanted to go in life. My advice for young aspiring engineers is that it’s important to work hard in your younger years and focus on your education so that you have a foundation for later on in life.

“That is … crucial. My parents always encouraged us to work hard and do our homework before we thought of playing or going out with friends because to get to where you want to be in life and to enjoy life to the fullest, you need to have that strong foundation and you need to be pursuing something that you enjoy.”

Turkey, not used since 2011, and three Middle East races replace those cancelled due to Covid-19
Sport
3 weeks ago