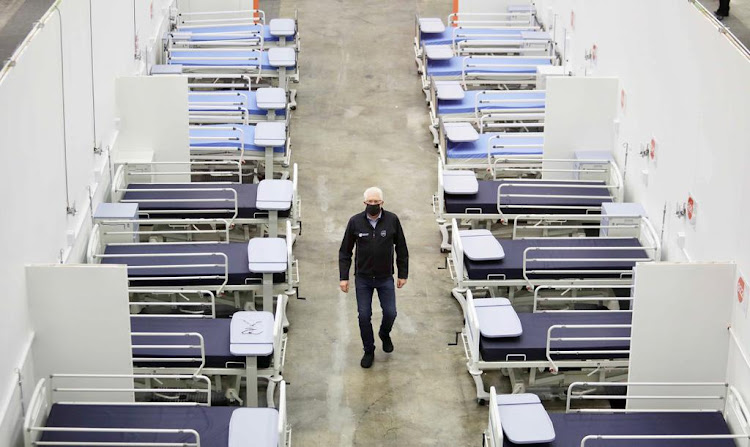 Beds are set up at a temporary field hospital to deal with Covid-19 cases at the Cape Town International Convention Centre in Cape Town. Picture: ESA ALEXANDER

The number of deaths due to Covid-19 has been dramatically under-reported and, in some provinces, as many 10 times more people have died than health department statistics show, according to a report by the Medical Research Council (MRC).

The council tracks SA’s mortality numbers and is able to chart the number of natural deaths against those in the same period in previous years. These are called “excess deaths”. The measure has been widely used internationally to track the Covid-19 death rate.

In SA, by the second week of July there were 59% more deaths from natural causes then would have been expected based on historical data. The MRC says the number of deaths “shows a pattern that is completely different to those indicated by historical trends”.

One of the authors of the report, Prof Debbie Bradshaw, says the timing and geographic pattern leaves no room to question whether this is associated with the Covid-19 crisis. “However, the weekly death reports have revealed a huge discrepancy between the country’s confirmed Covid-19 deaths and number of excess natural deaths,” she said.

While department of health figures show that the pandemic has not yet taken root in Mpumalanga, Limpopo and the Free State, the number of excess deaths indicates that the infection rate is likely much higher than recorded.

The ratio is the lowest in the Western Cape at 1.6, but above 5 for all other provinces. Gauteng and the Eastern Cape have ratios of 6.1 and 6.6, respectively.

The council says that the gap between excess natural deaths and confirmed Covid-19 deaths is probably comprised of people who die before they reach a healthcare facility; people with Covid-19 dying without a test being done or without the results available; and people dying from other causes because health services have been re-oriented to Covid-19.

The excess deaths include those directly attributable to Covid-19 and those that occurred from other natural causes that could not be treated as ...
National
8 months ago

The province appears to have passed its infections peak, say health authorities
National
8 months ago

Telling people they are wrong is not as easy at it sounds, say Covid-19 ...

Telling people they are wrong is not as easy at it sounds, say Covid-19 ...