When explaining why municipalities are broke, opposition MPs rounded on Nkosazana Dlamini-Zuma citing her ‘poor’ management 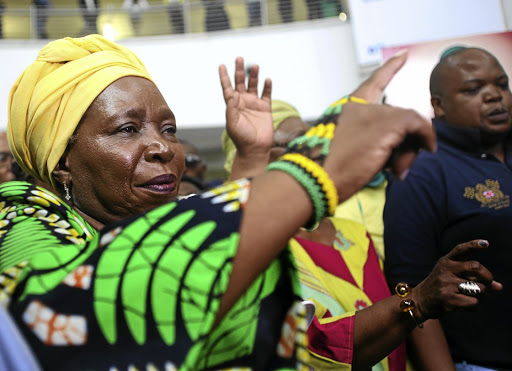 Municipalities, which are at the coalface of service delivery and the fight to curb the Covid-19 pandemic, are battling to collect revenue with the three major metros seeing a drop of more than R3bn in the past three months.

This could have an impact on basic service delivery, such as refuse removal, and the supply of water and electricity.

“Covid-19 has not spared the municipalities, it has affected the revenue collection potential of all municipalities. For instance, there has been an under-collection of R3.1bn over the past three months in eThekwini, Ekurhuleni and the City of Cape Town,” said co-operative governance and traditional affairs minister Nkosazana Dlamini-Zuma.

Delivering her budget vote speech to MPs on Wednesday, Dlamini-Zuma said that to ease the burden on municipalities the president has announced an allocation of R20bn, of which R11bn is under the equitable share and R9bn is repurposed infrastructure conditional grants. Finance minister Tito Mboweni tabled an emergency budget in June in which allocations to departments were mostly reduced due to the Covid-19 crisis.

The department’s re-adjusted budget is about R107bn. This an additional R554m allocated for the presidential stimulus programme, said Dlamini-Zuma. “We will use these resources to create 25,000 jobs through building and maintaining infrastructure using labour-intensive methods.”

Opposition MPs used the debate on the department’s budget to pick apart Dlamini-Zuma’s work and “poor” management of the Covid-19 crisis.

DA MP Haniff Hoosen said that while governments across the world have been doing everything humanly possible to protect its citizens from Covid-19, “our government has been designing regulations that border on madness”.

“They are milking the state for every penny and not a single person has been thrown in prison for this, because our minister is busy fighting zol and alcohol. We are calling on minister Dlamini-Zuma to refocus her efforts and take immediate steps to stem the flow of corrupt activities in municipalities before there is nothing left to steal.”

Michael Groenewald, from the Freedom Front Plus, said service delivery is basically non-existent, while fraud and corruption are the order of the day. “The deep-rooted corruption in the government, which continued unhindered through the period of the lockdown, is clearly evident [in the] community work programme where claims were submitted by deceased people; in the Unemployment Insurance Fund scandal; in the crisis in the North West’s health department; in the motorcycle scandal in the Eastern Cape; in the fraud in the procurement of personal protective equipment; [and] in the loss of R32bn due to fraud and corruption.”

Groenewald said only 20 out of 257 municipalities obtained clean audits, and many made payments amounting to R1.2bn to consultants despite staff members already being paid to do the work.

“Fraudulent appointments; senior officials implicated in the VBS Mutual Bank scandal and no action taken against them; councillors selling food parcels; power outages due to municipalities’ non-payment; dilapidated municipal infrastructure — since 2002, only 32 out of 239 corruption investigations have been finalised with only 13 convictions,” Groenewald said.

“And still, amid this time of crisis, the government decides to throw another R11bn down the bottomless pit of municipal squandering while drought relief to farmers is taken away and the funds allocated to infrastructure are reduced ... The goose laying the golden egg can no longer do it. Taxpayers will not keep paying to fund fraud and corruption while there is no service delivery. The rates and taxes levied on services must be earned.”

Too little set aside for local governments in adjusted budget, says Salga

Electrification of rural areas hit by budget cuts due to pandemic

Likely cuts of R230bn over the next two years means a delay of electrification, not that it won’t happen, says the energy department
National
9 months ago

Right hands not at the till in municipalities, says Makwetu