State reaches out to smooth court processes during lockdown 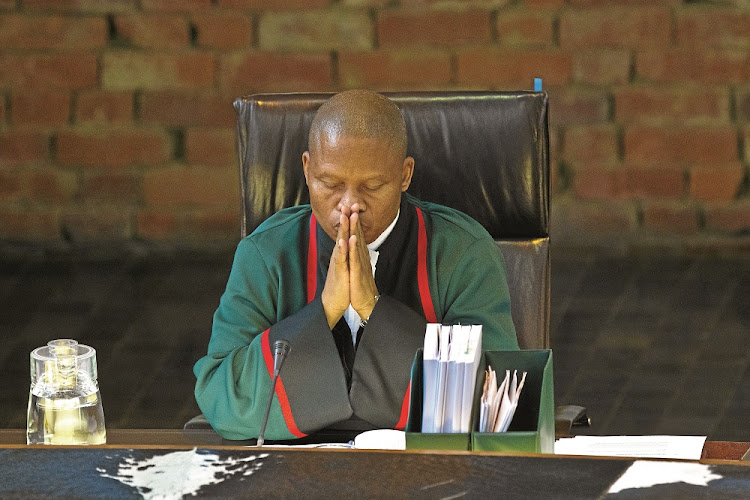 The government was talking to stakeholders in SA’s courts in an effort to sort out “teething challenges” in their functioning, which was adversely affected  by the lockdown.

The lockdown, imposed to curb the spread of Covid-19, resulted in the courts initially shutting up shop, which hampered access to justice in the first two months of the lockdown.

The General Council of the Bar (GCB) officially raised myriad concerns, not least of which was a dire warning on the growing backlog of cases in SA, as well as the negative consequences for access to justice.

The GCB also raised an issue about inconsistencies in regulations and directives issued respectively by justice minister Ronald Lamola, chief justice Mogoeng Mogoeng and the various heads of courts, which led to confusion as there was no uniformity.

While the courts have significantly increased the types of cases being heard since the lockdown was eased at the beginning of June, there were still some issues in how they functioned.

In a media briefing on Wednesday, Lamola acknowledged there have been complaints about differences in the directives issued. He said there was an engagement between the department and various role players and stakeholders from the judiciary, the National Prosecuting Authority and the legal profession to resolve some of the teething challenges.

He said other challenges related to connectivity and enabling the various networks to function.

Some of the engagements over the functioning of the courts have been very robust, as is shown by correspondence between the GCB and the chief justice, which Business Day has seen.

A letter the GCB wrote in which it raised the profession’s issues elicited an unimpressed response from Mogoeng.

In his response dated June 7 2020, Mogoeng said while he appreciated “the magnitude and the implications of the challenges or frustrations the organised profession have to contend with as a result of the directives, it still doesn’t remove the need to be measured in expressing your genuine concerns”.

He said it “offends one’s sense of courtesy” to read that what judge presidents have done to have courts function under unprecedentedly challenging circumstances was being characterised as “less thought through”.

“That you disagree with their approach very strongly gives you no licence to project them and their approach as negatively as you have chosen to do,” Mogoeng wrote.

He said it was not necessary to meet with the GCB, as the body had proposed in its initial communication.

In the GCB’s response to Mogoeng’s letter, written by its chair Craig Watt-Pringle and dated June 18,  the body regretted the chief justice took exception to the “unflattering” statements in the letter regarding some members of the judiciary in terms of how the courts were functioning.

“However, the very purpose of our letter was to direct your attention, as head of the judiciary, to very serious barriers to access to the courts being experienced by our members and by the public. We believe that we owe it to you to be forthright, as we regard the current situation as both unprecedented and critical,” Watt-Pringle wrote.

Watt-Pringle added that the “unvarnished truth is not particularly flattering of some divisions of the high court”.

If the chief justice found the way the GCB raised the issues “discourteous”, the GCB apologised for it, and assured him of its best intentions, Watt-Pringle wrote.

But he added that while Mogoeng expressed gratitude for the GCB raising their concerns, his letter did not suggest that “the validity of any of our concerns is being entertained, or will be acted upon”.

He said the purpose was not to consign blame, but to find solutions.

Watt-Pringle said that since their first letter was written, they had received reports that matters had improved in some divisions.

He said it would appear the lockdown was likely to remain in place for months to come and that the GCB, with its estimated 3,000 members, remained available to “play a constructive role in relation to these issues”.

The chief justice has not yet responded to the GCB’s follow-up letter.