We will not be bullied by the taxi operators, says Mbalula 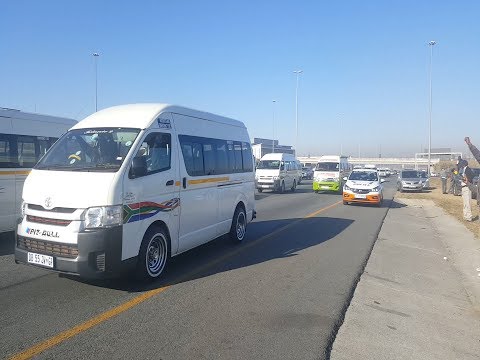 Anger and frustration boiled over on Monday morning when Johannesburg commuters were caught up in a huge Santaco taxi strike. Picture: SUPPLIED

Transport minister Fikile Mbalula says the government will not be bullied into increasing the R1.14bn in Covid-19 relief fund for the taxi industry.

Economists, unions and employers have warned that the struggling economy will bear the brunt of the strike as most workers could not reach their workplaces. Most sectors of the economy reopened on June 1 when the country eased to level 3 lockdown, allowing for more than 8-million people to return to work.

The strike saw taxi ranks in the eastern, southern, western and northern corridors of both Johannesburg and Pretoria deserted, and major highways blockaded with minibus taxis by disgruntled operators.

In other areas the police and soldiers had to be called in to help clear the traffic jam, using rubber bullets to disperse the operators.

Mbalula announced at the weekend a R1.14bn Covid-19 relief fund for the taxi industry. But this was accompanied by stringent conditions aimed at formalising the sector which contributes R40bn to the economy a year.

The stringent conditions included the taxi operations must be formally registered as a business entity and that the registered business must have a banking account into which the relief allowance will be paid.

The conditions also state that these businesses must be registered for income tax and other applicable taxes related to running a business; and that the registration process includes registration of employees with the Unemployment Insurance Fund (UIF), the Compensation Commission and for the skills development levy.

The businesses need to be in possession of a valid operating licence or a receipt as proof of an application for an operating licence. These receipts must have been issued before February 28. The SA Revenue Service (Sars) will be the implementing agency to register and administer the relief to the taxi industry.

The R1.14bn was not compensation for the losses incurred by the industry during the lockdown. “It’s relief because if we were to calculate loss it goes into billions of rand. I can’t say the money is enough, it’s relief,” said Mbalula.

Gauteng has the largest number of the estimated 300,000 minibus taxi population in the country. The industry, responsible for about 350,000 jobs, transports more than 15-million passengers each day.

However, as part of regulations aimed at limiting the spread of Covid-19, cross-border and interprovincial travel remain prohibited and the minibus taxis’ loading capacity has been reduced to 70%.

Speaking to taxi operators in Pretoria on Monday, Mbalula said: “I condemn violence in strongest possible terms. You can’t protest by closing roads, you’ve got no right to do that. There is no need to intimidate people to make your point heard.”

He said he had engaged with the leadership of the SA National Taxi Council (Santaco), the largest taxi organisation in SA, which had called the Gauteng strike.

“I spoke to your leadership, I told them this is government’s decision, they told me they don’t agree with what I’m saying. I’m here now to say stop the violence. In the same breath: you’ve got the right to protest, you can say Mbalula must fall, but you’ve got no right to close roads. Anyone who says you do is misleading you,” said Mbalula.

The minister stressed that closing roads interfered with the rights of those who wanted to use them to go to work. “We can’t take decisions in this country because we are intimidated, otherwise there will be no government,” he said.

The minister and the leadership of taxi organisations are expected to meet again this week to look at other outstanding issues such at the request to reopen interprovincial travel, and 100% loading capacity, among others.

Cosatu spokesperson Sizwe Pamla said while they sympathise with the taxi operators and support the government’s idea to help them, “they (taxi also need to realise that we do not have infinite resources and they do not pay tax”.

“We understand that the taxi industry has suffered serious neglect from the government over the years despite it being a big contributor to the economy,” he said.

“The economy will pay a big price over the strike at a time when we are supposed to be working together to kick-start the economy.”

Pamla said the government needs to “use this opportunity to properly subsidise and regulate the industry”.

Cosatu said there will be no winners in this tense standoff and cautioned that workers will lose the most as only 30% of households owned a car. The other 70% depends on the unreliable public transport system. “Already workers are spending about 20% of their meagre incomes on transport every month,” said Pamla.

National Council of Trade Unions (Nactu) general secretary Narius Moloto said they supported the taxi industry as most businesses were “almost wiped out” during the lockdown.

“It is true that the taxi strike has affected workers in that they did not go to work, but that exposes the government’s lack of public transport plans and capacities,” said Moloto.

“Our economy has been struggling for some time now. There must be economic and social justice which balances the interest of all stakeholders.”

Santaco spokesperson Thabiso Molelekwa could not immediately be reached for comment.

Meanwhile trade union United Association of SA (UASA) on Monday evening said the striking taxi operators were “holding the country to ransom" at a time the nation was working towards economic recovery.

“The taxi industry’s conduct is shameful, unfair and unjustifiable under the circumstances,” said UASA spokesman Stanford Mazhindu. “They are taking advantage of vulnerable workers who have no other means of getting to work and earn money to look after their families, many of whom lost incomes during level 4 and 5 lockdowns and are trying to find their feet again." said Mazhindu in a statement.

The SA National Taxi Council says the fund, to which it is hoped business will contribute as some taxi businesses likely to collapse
National
1 year ago

Mbalula, under pressure from taxis, almost gets mask issue right

Remember, wearing a fabric mask doesn’t replace the need for social distancing, staying at home if you’re sick, or washing your hands
Features
1 year ago
Next Article

Minibus taxi fare hike of 172% to be reviewed, says Santaco

No UIF pick-up for minibus drivers

Minibus taxi fare hike of 172% to be reviewed, says Santaco

No UIF pick-up for minibus drivers