About 118,000 have reportedly been arrested for lockdown violations 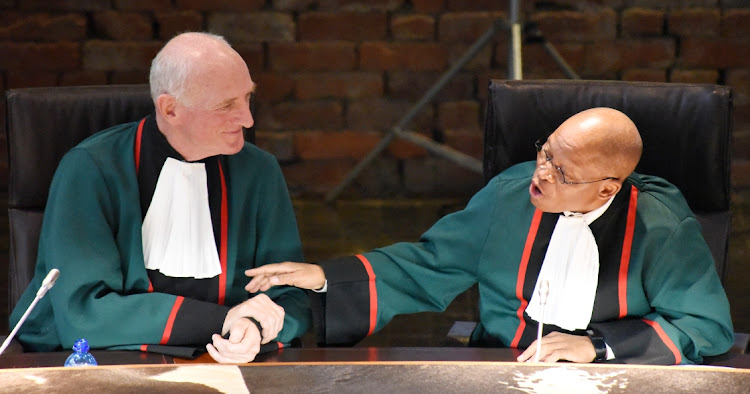 Former Constitutional Court judge and inspecting judge for the Judicial Inspectorate for Correctional Services Edwin Cameron said on Wednesday that it was “appalling” that people who had contravened the national disaster regulations were being incarcerated as remand detainees.

In terms of the regulations under the Disaster Management Act a person who commits even a minor offence can be arrested. Many of those in custody cannot afford to pay bail.

The judge made the comment in a meeting of parliament’s justice and correctional services committee, adding that he had been informed that remand detainees at the Johannesburg remand centre had increased by between 10% and 15% as a result of these contraventions.

The department of correctional service’s chief deputy commissioner for strategic planning Joseph Katenga also told MPs that the number of remand detainees had increased “quite considerably” due to violations of Covid-19 rules under the lockdown.

About 118,000 have reportedly been arrested for these violations and the payment of admission of guilt fines means that they now have a criminal record.

Cameron welcomed the announcement by President Cyril Ramaphosa that the parole dates for about 19,000 non-violent prisoners would be brought forward but he hoped to see action on remand detainees.

“We visited the Johannesburg centre with national commissioner (of correctional services Arthur) Fraser a couple of weeks ago. The situation there is appalling and we need to decongest our remand centres for basic dignity, for basic human rights but also for Covid safety,” Cameron said.

Department of correctional services officials told MPs that the department had estimated its Covid-19 budget at R585m.

The department has to ensure the safety and hygiene of more than 150,000 prison inmates at its 243 overcrowded correctional facilities. The department has already reported 675 confirmed cases of Covid-19 with 219 officials and 456 inmates infected. Of those infected, 460 are in the Eastern Cape and 170 in the Western Cape.

The unbudgeted for expenditure would cover the recruitment of 300 professional nurses to enhance primary health-care facilities at prisons; the procurement of temporary quarantine and isolation units at a number of correctional facilities nationwide; the procurement of preventive equipment such as masks, surgical masks, gloves, sanitisers and electronic thermometer scanners; and increased expenditure on health-care services such as testing.

Fraser noted that since the suspension of family visits for prisoners there had been an increase in security incidents, including escapes and attempted escapes.

Cameron told MPs that the inspectorate was not declared an essential service and had therefore not been able to conduct prison inspections. “We have been rigorously curtailed in what we have been able to do,” he said.

The SAHRC grilled MPs about police and SANDF conduct during the Covid-19 lockdown, as well as issues such as food delivery
National
11 months ago